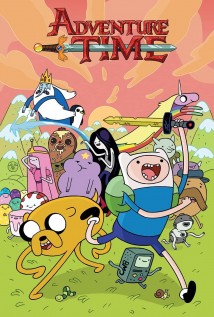 A 12 year old boy and his best friend, wise 28 year old dog with magical powers, go on a series of surreal adventures with each other in a remote future.

For a kids show, Adventure Time has surprising mature and deep themes, making it a joy to watch for all ages. The characters are all so diverse and unique and the voice acting is perfect. For the most part they are light hearted and funny, but as the show gradually reveals their backstories and flaws, it adds quite a bit of depth and even sadness at times. This allows them to feel real and relatable despite the supernatural setting. What I enjoy most about Adventure Time is that even though the episodes seem random and disconnected, they all help build up a rich and diverse world and reveal many subtle ideas and story arcs that are massively paid of in the future. It is a show that leaves me smiling every time I watch it, with a heartwarming display of friendship, morality and forgivenss. In addition, it is also hilarious and full of clever, memerable one liners. For me, the only thing holding this show back from being a masterpiece is that it has a few boring and even uncomfortable episodes that I don't feel like are representative of how good the show normally is. Despite this, I love this show and quite simply, its awesome.

I first saw Adventure Time on youtube some years ago. Now it's TV show. I loved it when it was a one-shot video. And I love each episode I've seen on Cartoon Network even more.

Yes, the characters are silly. Yes, there is a fair amount of "OMG, that's so random!" going on. But while shows like Chowder may fail at times using this model, Adventure Time succeeds.

It does so thanks to wonderful voice acting, clever dialog and most of all, unusually mature themes. Not in a risqué sense, but...it doesn't rely on cookie cutter stories and it's comfortable leaving some endings ambiguous. It's also comfortable making characters believable (despite its fantasy setting).

This show is deserves attention.

"It's Adventure Time! C'mon grab your friends. We'll go to very distant lands. With Jake the Dog and Finn the Human the fun will never end. It's Adventure Time!" Adventure Time was an animated short made by Pen Ward and his team a few years back. The short was full of comedy, off the wall jokes, chocked full of hilarious one-liners and even an entertaining fight scene. And now, years later it is a full blown television series. The only thing people were concerned about was that the adaption could never live up to the original.

Well I'm here to say it has. In. Every. Aspect.

The only thing different is the characters and world have been expanded upon, and Penn's name is now Finn.

Adventure Time with Finn and Jake is Cartoon Network's newest cartoon. Similarly to the pilot, it is full to the brim with humor (some which is directly aimed at the adult audience, THANK GOD) There are still many one liners (most of which have been stolen from the pilot but I'm hoping that as the series goes on this will diminish. The music isn't very memorable, but it isn't supposed to be. It's a show about Finn, Jake and all of their friends and the stupid situations they find themselves in.

Cartoon Network has finally found a gem, and I hope for their sake that they keep this show running and start funding more shows like this instead of obviously cheap-made flash cartoons (Johnny Test anyone?) It is a show like this that was needed to get CN back on top, and I hope it'll stay that way What time is it? ADVENTURE TIME!

Adventure Time is the story of an almost normal 12-13 year old human boy named Finn, and his magical dog Jake(voiced by John Di Maggio). They live in the enchanted land of Ooo and have many strange adventures exploring dungeons, saving princesses(most commonly Princess Bubblegum of the Candy Kingdom)and meeting many strange inhabitants of the world, some friendlier than others.

The plot sounds simple enough, but Adventure Time is one of the most surreal kid's shows to come out of Cartoon Network for a long time. And I love every minute of it.

While I find the earlier episodes of the show ranged from good to OK, the later episodes got really great with the animation and jokes improving as the series went on. The characters are all very likable with unique personalities and quite a few have very memorable and hilarious one-liners. Every time I sit down and watch this show, I am greatly entertained.

That doesn't mean it's for everyone though. While some, like me, may like the surreal appeal others may not. I don't recommend this show to the younger audience(younger then 8) as this show may unintentionally give them nightmares at times. Parents more used to family friendly cartoons may also not like the jokes geared towards the older crowd(and trust me there's a lot of them).

Either way, this show has great writing, animation, voice acting everything to me is near perfection. I recommend it to anyone who enjoys a different kind of kid show.

Adventure time is a strange animal. It's on cartoon network. Not adult swim; but on during the regular hours. The shows target audience is children. But nonetheless, this show is the best cartoon I've ever seen. I saw the pilot a couple years back and finally saw the show and i was blown away.

Adventure Time does not teach lessons per se. It starts off supposedly trying to teach you something, but instead saysscrew it and veers off into AWESOME. Its random, hilarious, and perfect. The characters are messed up in the best way possible. If any lesson can be taken from this show it's that nobody is perfect; everyone has their flaws. Everyone messes up, a lot. Everyone makes mistakes. Even though Finn is the only human in the show, everyone in the show makes human mistakes. It doesn't matter who or what you are, you're still going to mess up. But no matter what flaws you may have or how much you screw up, at the end of the day your friends will be there for you; especially when you're there for your friends.

If your friend is in trouble, destroy the problem with sword, song, reason, or love. I'd recommend this show for humans 1-200.

A few months ago, a friend of mine showed me a grainy YouTube video of the "Adventure Time" short that was shown on Nickelodeon. I immediately fell in love with the short and we began reading up all about since we just learned it was being adopted by Cartoon Network. What we found out and watched blew us away. The amount of thought and imagination put into this show is astounding. I have never remained entertained for an entire episode of a show before, let alone an entire season! The wild and wacky aspects are quite entertaining but also do not remove anything from the ongoing plot and story. We see how characters develop and even see how moral choices produce themselves to challenge the duo, Finn and Jake, along the way. Though they stumble, this imaginative and amazing (not to mention post-apocalyptic) world always seems to lead back to the path of righteousness which is exactly where this show is.

In short, this show is an anomaly among mediocrity. This is a seemingly limitless world of entertainment that does not merely dance around idiotic humor. This is a show that isn't afraid to have fun and toy around with the absurd to make its point. I applaud Pendleton Ward and his crew for flawlessly producing what I could easily call the most inventive and fun show I've ever watched.

Adventure Time is near perfect. I have a personal connection to this show, as it was my favorite show to watch growing up. I decided to revisit this show and binge it start to finish, and i was not disappointed. I love everything about this show, the characters are incredible, the story arcs are amazing, the writing is great, and the world building is extremely captivating. Adventure Time isn't for everyone, and for most it might be tough to get through so many episodes, since so many episodes are useless filler, especially towards the middle of the show, but everything that this show does bad is absolutely shadowed by what it does good. The show gets better and better and more watchable as it progresses, despite a few rough patches. I've never seen character development as incredible as this in any other cartoon. I absolutely LOVE the three miniseries they threw together in the final few seasons. I love how much depth and backstory there is to every character. I could go on and on about what this show does right, but i think you should just go and see for yourself.

I very rarely find anything on TV or in film that makes me laugh as frequently and unexpectedly as this show. Adventure Time is a well needed breath of life into cartoons. What impresses me most is that the humour is very mature but unlike other shows of that nature, for example Ren & Stimpy, it's still completely for the children. That's where the magic lies. When watching you become a kid again, immersing you in the imagination all of us shared as a youngster.

The simple, but I think fantastic, hand drawn animation cements the feeling that this is no ordinary cartoon. It oozes with great characters and settings. Everything about Adventure Time shows all the love and care invested it by Pen Ward. I'd recommend this show to any cartoon lover and anyone who's still a kid at heart.

There are some who say punchlines are better if you can't see them coming. One way to achieve this is to employ tangential humor, but you sometimes risk completely losing your audience. Pendleton Ward has proved that he has a formula for tangential humor, and so far the equations are working out.

Adventure Time's pilot aired in 2008, and since has collected a cult following on the internet. A boy and a shape-shifting dog save a bubblegum princess from an ice king...such a setting is delightfully fanciful, even for fantasy! For those who loved the original, there may be some differences that make you uncomfortable. For example, several of the voice actors are different, and the character designs are slightly altered. However, as long as you came for Pendleton Ward's brand of humor, you'll be more than satisfied.

Not everyone is going to like Adventure Time, however. There are many who simply have not been exposed to such an exotic type of humor, and so this show may frighten rather than entertain.

I'm sure, however, that the consensus is that Cartoon Network has improved it's show/success ratio by green-lighting Adventure Time with Finn and Jake.

Adventure Time, like many other shows of its genre, often gets misinterpreted as simple entertainment for children. However, it's also a thoughtful piece of art with a vibrant aesthetic, great humor and silly characters.

Furthermore, it´s very light-hearted and easy to get into, no matter which episode you start watching from. It works as a semi-chronological collective, with each one centered around a simple lesson, theme or fun story.

There is passion put into every frame of animation, line of dialogue and song. Anybody can enjoy this show for what it is, and that is kind of the point. "You don't just read the poetry to understand it, you got to feel it."