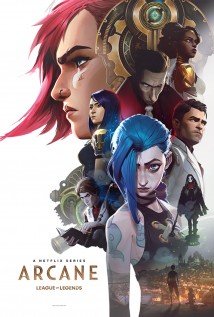 Set in utopian Piltover and the oppressed underground of Zaun, the story follows the origins of two iconic League champions and the power that will tear them apart.

Arcane is a Nefilx show. 🙄

It's a depressing, gloomy, sissy drama, poverty, futuristic and has the typical plot, action, characters, dialogue and story. 😴 The show has no productive messages or value. Yet people actually do sit and watch this show. 😞

As a child I watched tons of classics. Even shows back in the 90s that I didn't like at all like Gundum Wing and Friends I can respect a tiny bit even though they were filthy products.

Today children/teenagers are into depressing annoying shows like Arcane. All this show is telling me is what is upon humanity. In addition the animation is ok not the best. It's far more tolerable than Marvels What if...?

As a child I don't think I could sit and enjoy such an energy sucking show. There is no life in this show.

Overall a depressing show that I only knew about because I had a teenager in my home.

What started out as an excellent series with two good episodes, quickly faded in to a hodge podge of good and bad. It appears that the writers just got sloppy. It started with the third episode then in the fourth it went in to full bloom. Making stuff happen just to make the story move forward.

It has some great moments. It's all the down stuff in the character development which bother me. There is a scene in the bar/night club which is good. Great sound track, action, suspense, drama.

It's like the writing is being done by multiple people in different Universes. They aren't working together to make sure character development and continuity is kept in line.

I believe this show is overrated.

Arcane: An animated SF/Fantasy Steampunk series on Netflix. In the cities of Piltover and Zaun there is unrest, Piltover the upper city literally looks down on and oppresses Zaun. We have gangs of thieves, rebels, steampunk Stormtroopers, magic melded with science. This is serious stuff with great physical and "magic" fights. Also a tale of two sisters falling out and Scientist/Mages battling against the conservatism of the Council who fear the unleashing of uncontrollable powers. It's set in the League Of Legends game universe. Directed by Pascal Charrue and Arnaud Delord, written by Christian Linke and Alex Yee. 9/10.

Made by gamers (RIOT) for gamers, but, also, is a stand alone piece of art for people, like me, unfamiliar with the game, LEAGUE OF LEGENDS. The series is visually stunning in 3D and 2D animation with beautiful attention to detail. There is incredible world building, an engaging story line, music that serves as narration and a stellar voice cast. I give this series a 9 (superb) out of 10. {Steampunk Fantasy Adventure}

Surprise how i enjoyed the art work.

I know nothing of the game/books.

Will see where story lead.

Here's to the new us.

League of Legends (LoL)' first project in expanding its own cinematic universe is done. The story between sisters, rich and poor, loyalty and betrayal, peace and war, and everything in between.

There's a common saying that LoL's big budget went into animation instead of balancing the champions in game, and this couldn't be more right. I did not expect this masterful level of animation. After each episode, they found more ways to wow audiences with amazing visuals and transitions. The fighting scenes were hard-hitting and jaw-dropping.

Even though the series wasn't fully canon to the original lore, it's still an intense story that set up an interesting universe. Not gonna lie, the first act didn't impress me too much, but episode 4 afterward got me entirely on board. My only problem with the story was that I just couldn't get enough of it. I wanted more and I don't like waiting.

Just as cool as the animation was the characters. Many character dynamics fascinated me and made me realized how much I needed them. I'll admit that some characters were straightforward, but not all of them were predictable. Some still surprised me until the very end. The directions for all characters were incredible.

Overall, even though the game was a love-hate relationship, Arcane was for sure all love, and a phenomenal step in setting up LOLCU. 8.5/10.

I watched it with my parents who don't know anything about league's universe. I have been playing league since 2010, So my opinion may be a bit biased.

But my parents were pleasantly surprised. They said that sometimes it was a little clear that this series is more aimed at a young adult audience. Some usage of the pop songs, and the villian being a little over the top mustace twirly.

But overall they enjoyed the first 3 episodes and wouldn't mind watching the rest in their own time.

As for me. I loved it! It was everything I hoped for and then some. Riot's art department was always on their A game. And with the track record from Fortiche I knew this had very little chance to blunder.

Knowing Riot's art department it has an excellent story, well written charaters and a lore rich world to take elements from. All in all, this show comes together very nicely. And shows some of the best talents Riot has to offer.

I have heard of it but never played it. When i first turned this on and saw kids i immediately turned it off and sighed "not another kids show". But then i kept watching and realized this is not a kids show. It just has kids as characters. But wow it got dark and good.

I never played the game lots of people at my jobs are fan of it.

But this series is amazing, anime, story everything i can't wait to see season 2 and where it goes.

I have never played the game this is apparently based on, nor did I knew anything about this world or character before watching. Dunno if that impacts my review, but I see very little good stuff with this show and it is definitely not worth the very high rating.

The good is that the art work is great and make the world come alive. The voice acting for each character (with a couple of exceptions) is amazingly done. Music and sound design excellent. Sadly with this great praise it is also all that is good.

The world building here is abysmal. I have no idea who is who, why I should think badly or good about these different characters. There is no background story, there is no explaining for anything. Is this a fantasy land? Some alternative Earth? Another dimension? There is magic here and science, but what is what and where does magic come from? No one knows. There are clans, families, an academy, and there is top-side humans and bottom dwelling humans, but not a single thing of this is explained. At all. We get some bits and pieces and we get some background for some characters parents or some such but the world as a whole? This could just as well be an anthill, or someones dream, or just nothing. I have absolutely no idea, and unless you have played the games etc (where I hope all of this is explained) neither will you understand anything.

But it does not stop with only world building, we are never told how anything works, how diplomacy or democracy or lack thereof work. We do not know how their weapons work, or how many people live where. Since none of this is explained, what are we suppose to think? Who are the protagonists and antagonists? What is going on!?

Worse still is that the show is so boring and convoluted. So this thing happen so that means this thing will happen and this person will do this and say this so the next person can do that and then of course that need to happen so that too can happen... It is so badly done and so badly written that I was getting so frustrated and bored. I found myself fast frw several times to see if the story goes somewhere, and it does - the story jumps time-wise completely unexplained and I feel that all of the initial characters never get the time to develop, we are just supposed to accept they are this person now, jump 10 year and now they are this person. Yawn and yawn.

And finally this is very cringe. So many cliche characters with so much political correctness and almost everything going on we have seen a million times before and done better. This is far, far from anything original.

I sort of enjoyed the first episode, and the last episode, and a there are tons of great scenes here and there, but since they are part of this boring never explained world where nothing is explained and characters just jump around I care for nothing and the show also becomes nothing. Why should we care about any of this? Because of the game?

I give this a generous 4/10 because of the acting, art work and some great stuff throughout the show. But this cannot be recommended to anyone. How did this get so high score? Are people this lost?

I am a newbie to the source material, but the first 3 episodes of this show blew me away! Groundbreaking/beautiful animation, awesome environments, spectacular cinematography, cool musical choice, compelling characters, great voice casting/acting, and some interesting Sci-Fi/Fantasy lore! :-)

Yes, there are strange scenes that some actions don't make sense, and some of the voices seem out of place, but for the most part it comes together quite well. The CGI animation is well done.

I have never played LoL and the characters in this are all new to me. They do some flashbacks, and if I hadn't had the Closed Captions on, I would't have known what character the flashback is for; the CCs tell what character is talking.

The plot is the cliched "class struggle," but lots of video games are like that, based on guilds, tribes, and classes of characters too.

I really enjoyed it, but don't expect any life changing stories . . . It's basically for kids. 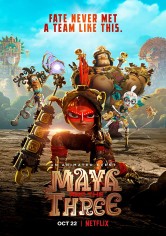 Maya and the Three 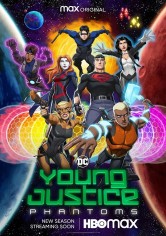 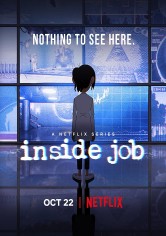 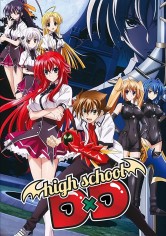