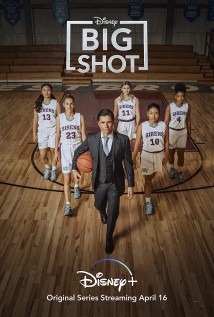 A temperamental college basketball coach who gets fired from his job and must take a teaching and coaching job at an elite all girls private high school.

I look forward to this show every Friday now. Honestly so surprised by it. I really only started it because I was going to Disney anyway to watch TFATWS. I was like okay I'll give this a shot. I don't have a single problem with this show. I'm genuinely surprised how good all the actors are, how fun the show is to watch, and how much I want to see Stamos succeed in the role as Marvin Korn. Honestly, the show is a thousand times better than The Mighty Ducks. TMD is incredibly corny and the acting is so suspect at times but I think the casting they did for Big Shot is so much better than you'd think. Definitely give it a shot.

Right, this is a high school show from Disney... I must be going out of my mind or something!!? But, I don't care. I really enjoy this show. It makes me feel good and it makes me want to do better. Da*n you Disney, what have you done to me?! LOL

It's a really sweet and actually good show. I have seen 4 episodes so far, and I'm waiting for the next one. Some shows and movies just drags you into their world, same goes for this show. I'll give you, school is hard, many bullies and stuff, but it's still nice to be part of something sweeter. Taking a break from life. I know how hard school was, we all do. But instead of showing us how it was, it chose to show us how it can be!

Disney, you sons of bitc*es, you have fooled me into your evil plans once more! For that, you have my respect!

I admit I was going to watch this show for John Stamos. Although, I have to say, this definitely is one of the outstanding shows ever on Disney Plus. Love how the writers didn't decide to add unrealistic stunts or corny jokes which could kill the show easily. I really enjoy their dialogues, a little more mature and realistic compared to other Disney shows. No cringeworthy conversations. Diverse cast. Terrific acting. Good representation/messages. The pilot episode was pretty solid. Looked like it was a great start. I am really looking forward to seeing more episodes. I am really captivated to this storyline. Give this show a chance. I highly recommend you to watch it. Reason I enjoy this show is because there are not a lot of female basketball/athletes movies and shows ever since. So it is nice to see another one.

Edit: I just finished all of season one. I absolutely loved this show. The story lines were believable, and the acting was spot on! I CANNOT wait for Season 2!!

Watched the pilot episode tonight. Wasn't ever a big fan of John Stamos, but Lord that man has gotten better looking with age! I liked the first show, and now can't wait to see the next episodes. I'm not sure when they come out but can't wait. I have not heard anything about this show so I didn't have any preconceived notions before it started. The story line is in line with a regular Disney show, but still seems pretty interesting. I like that the with the exception of John Stamos' character the majority of the show is centered around a female team. Not only that, it's high school so I don't imagine it will deal with all the stories the "grown up" shows feel the need to tackle. Yes I'm an adult, and my kids are grown, but sometimes I like to watch shows that don't make me have to spend so much time "thinking". Of course spending time watching Stamos isn't that difficult either! The rest of the cast is pretty diverse, but doesn't seem forced. It feels like the kids you would see in a normal high school. I can't wait for the next episode to drop.

I think this is one of, if not the most underrated show of 2021 so far. This show was great. I feel bad that this show, which is s sports show among other things, had to share the spotlight with the show of a legendary sports movie franchise, The Mighty Ducks: Game Changers, and the tail end of The Falcon and the Winter Soldier. Then The Bad Batch came in for the last half of the season, then just when Big Shot's only competition was The Bad Batch, Loki premiered during the last 2 episodes of Big Shot. I feel that is this was a network show like on ABC, or if it aired in a Disney+ slow time, it would have gotten a lot more attention. None the less, this show was great, it was the product of great writing, great acting, and even great directing. I was pleasantly surprised by how well the roles were played by everyone, the casting and acting by the actors were all perfect by everyone. The story of all 10 episodes of the season was also great.

Just completed the final episode. Am really glad that I watched it. The finale really nailed it. Don't know if there will be a season 2 but it would be great if there would be one. I liked the way each character was given enough screen time and how each of them battled their hardships.

I've been tuned in every week since the 1st episode and I think it's one of the best shows on TV! Kelly and Garrett are a great combo for quality entertainment! Season finale next week...so looking forward to it! Good choice J. S.( better than full house) lol. Great casting,writing,production,etc,etc!

Very surprised at how much I liked this the 1st episode of this series. Very watchable sports show. Worth a try folks.

Totally adore Big shot!!!! What an unexpected, fun and special surprise. Heart, soul, sports, a touch of romance, an excellent young and mature cast and great paced and well-written episodes that don't go over the top with the drama unlike too many teen series. I cannot fault this series and look forward to future storylines. I only hope this excellent standard continues - cynical me ;)

Not sure why we suddenly seem to have more of these formulaic shows about coaches and dysfunctional sports teams, but this show is not too bad! At first, I thought it would be about an unlikable coach who is a miserable human being, but actually ends up being a likable person that we can learn some life lessons from while he finds his own redemption. That's a good kind of "feel-good" story that doesn't seem (yet) to be overly (and overtly) dipped in all the political correctness and social justice messaging that's forced onto us these days by Hollywood. Big Shot doesn't have the humor and delivery that Ted Lasso has nor its ridiculous premise, but quickly establishes itself as a tad more serious but still light-hearted, less adult comedy.

Of course, if you want the kiddie version, you can watch The Might Ducks: Game Changers, which has has the most ridiculous premise, barely hanging onto what little association anyone can remember about the original movie.

Now, if Disney comes out with a show about a washed up ex-NFL coach who has to coach a South Korean high school football team made up of kids trying to dodge military service, I think we'll complete the set!

I am not a fan of overly 'woke' Hollywood, on the surface that's what this show looks like.

I am only 2 episodes in and don't want to jinx it but the show has given me some hope that they might be trying to do something that I haven't seen in a long while, which is to present both sides of an argument.

I saw some of complaints about PC bull from the first episode, but some of this is to be expected they are high school girls, but then the show expanded the teachers and made reference to the kind of things the students are taught and as the girls rightly point out, there is hypocrisy behind the lessons.

The coach is acting as a representation of masculinity in a feminine space, it's clear that over the show the team will melt his little heart and make him more reasonable and that's good. But what was also good to see was that he has proven to the girls that his methods do work too and that they can become stronger people and better team players by also changing a little.

So far I think the show is trying to tell us all to meet in the middle which is a positive message and I hope they continue down this route as a lot of people out there could stand to listen. 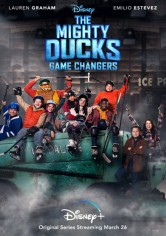 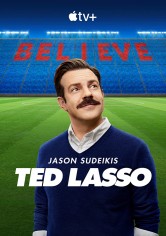