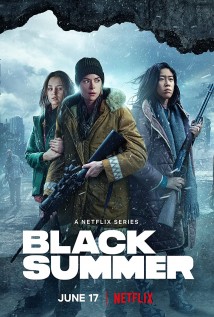 In the dark, early days of a zombie apocalypse, complete strangers band together to find the strength they need to survive and get back to loved ones.

It is completly different from ZNation, even if it is in the same universe and has the same creator and director, It is a horror thriller well made. It has the tension, suspense and almost no drama crap. Imagine you surviving a apocalyptic event, what would you do??? The show is told by the characters perspective, and it happens almost like real time, it is a little slow paced in the beggining but the action scenes are vey well filmed. The actors are not known to the general public, but do a terrific job, showing emotions like fear, anger and terror. The script is simple, you dont get to know a lot of the characters, but you are not supposed to. Peaple in a situation like this woldnt talk that much. I HAVE to say Fear the Walking dead first season, should have been more like this show. It is survivalism, selfishness what is shown here and it is the truth. The lead character is a little like Madison of FTWD... See this show, and forgive its low budget because there is good directing, and this season deserves at least 3 seasons, for us to know the surviving characters. I Give a 8 out 10 for the effort

Everything looks great, shots are long easy to follow and give the viewer a fantastic idea of the local environment, your rarely left confused as to which room or building you are in or where each character is. The stunt co-ordination for action scenes is top notch, no obvious extras randomly flailing to look busy, no shaky cam or crossing the 180 degree line to confuse everyone.

Where it falls short is the writing, the world building and character actions especially. The world makes little sense, there seems to be way more healthy humans than zombies, fully stocked grocery stores, weeks or months into an apocalypse, complete with electric motion sensor doors. Wounds are super inconsistent one guy might bleed out from a bullet hitting an artery in his leg, as you would expect, while another does a week long hike, survives a fist fight, fleeing from zombies etc.. with an untreated bullet wound in his gut and suffers only a slight cough.

Characters are mind numbingly stupid, constantly dropping or leaving behind weapons and supplies for no reason. Leaving lights on, windows and doors open and unlocked, sitting around awkwardly staring at each other, when they could be securing the building, sleeping or packing supplies. We see them score consecutive headshots on humans at decent ranges, but seem to always aim at the zombies torsos.

Then theirs the dialogues and boy they might be the worst ive ever seen, generally characters will spend minutes just sitting and staring at each other, and i don't mean we cut to a few minutes later, no, we are subjected watching them do nothing for minutes at a time. In fact, the entirety of episode 7 is just silently following characters around, watching them sleep, have dinner and talk absolute nonsense.

90% of their issues would have been solved if they just communicated, but then the lazy ass writers wouldn't be able to crowbar in the drama of people turning on each other arbitrarily.

This feels like alot of very skilled people from the more technical side of filmmaking got together and made a movie, utterly ignoring the importance of story and characters. If this was a game i would call it a tech demo. Something that will look good on the cameramans resume, but hardly a finished show.

Why can't soneone write a zombie apocalypse story where most people are of average intelligence or higher? Instead the writers always seem to think the only way to create tension is to make 95% of the main characters as dumb as a box of hair.

I get it that people panic and make wrong or silly decisions at times, but to never learn to close a door behind you, or to have 6 people mow down a single zombie with about 100 rounds and not one is a headshot, even though they've seen that this won't stop them. I mean COME ON.

I had average expectations but was gripped from start to end. Cleverly shot with a real time feel, the characters are fascinating and acting to match. Looking forward to S2!

The characters are all single digit IQs it seems. The school did it for me. I stopped watching due to pure frustration at this point. Seriously, how dumb do you need to be? So many levels of dumb.