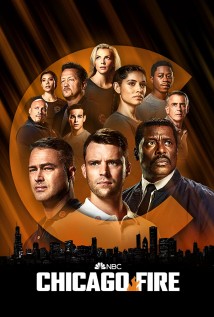 The story of firefighters and paramedics in the city of Chicago, both on a personal and professional level.

When this show first aired, I was not interested on watching a fire fighting drama. Besides, I've been watching another Wolf Production since 1999 and that was good enough for me. However, when Chicago PD was introduced, I decided to watch it because it came on directly after my favorite show and I love TV drama series. I feel in love with Chicago PD because of the zest and criminal kick-ass and I was hooked.

When Chicago Fire crossed over with Chicago PD recently, I was forced to watch Chicago Fire. Hummm, Chicago Fire very interesting and exciting I thought. I went to HBO On Demand and watched Season 2 of Chicago Fire. Let me tell you, I didn't cook, I didn't answer my phone, I ordered food delivery service and didn't move off of my sofa(only for bbreak) until I watched every episode. I then went to a local retail store and bought Season 1 and the disconnect from the world started all over again. By now you know where my review is going.

Chicago Fire is a potpourri of diversity, family, loyalty, emotions and laughter. A show that promotes life/death,the response and the danger firefighters face everyday, gives me a deeper respect for my local firefighter and EMT services.

I commend Mr. Wolf for having such great writers and actors/actress, I am humbled. I am aware it's only entertainment. However it's entertainment in a true and realistic form.

One of the Best Shows on TV.

But the annual introduction of some new form of weaselly political righteousness conflict sub-plot gets tiresome and old. These political in-fighting sub-plots detract from otherwise well written scripts. If Municipal Fire Departments suffer from this sort of thing so often then how do they serve the public.

We've all seen shows that started with a very exciting pilot suffer a slow boring death. A good show needs more than a good concept at the start, it needs good storytelling, good acting, likable characters and it needs to find a good pace.

The pilot of Chicago Fire was very weak. The story lines felt too familiar (old friends drifted apart through tragedy, secret painkiller addiction, unrequited love etc) and didn't blend together. And, as you can see on this IMDb page, in the next few days a lot reviewers burnt Chicago Fire to the ground.

For some reason I kept on watching. The second episode was a bit better, but by the third episode the show really found it's stride. I've just finished watching the fifth episode and came the conclusion that 1. Chicago Fire somehow ended up to be my favorite new show of the year and 2. All the negative IMDb-reviews are now really unfair.

Which is why I suddenly felt compelled to write a review of my own. I never do this, so bear with me.

Chicago Fire is not a procedural 'fire of the week' show. It actually does the ensemble drama really well. There is nice balance between the characters and I especially like how these characters connect with each other and how the story lines are slowly developed. In a way, it reminds me of The Good Wife, but with more action scenes (which is a great compliment in my world)

The friendship between roommates Leslie Shay (Lauren German) and Kelly Severide (Taylor Kinney) is great. Severide plays the tough on the outside, soft on the inside guy, who walks away from his medical problems by secretly taking lots of illegal painkillers. Not very original or interesting, but I've got to admit that my cynic self is really warming up to Kelley. Partly because Kinney plays the part very well, and partly because of his genuine scenes and aforementioned friendship with Shay.

Shay is gay, but that's not an issue on the show, just a part of who she is. As it should be, I applaud the CF writers for the way they portray her. Her scenes with fellow paramedic Dawson (Monica Raymund)are among my favorites.

Dawson also has some cute scenes with new kid on the block Peter Mills (Charlie Barnett), but is too much in love with lieutenant Matthew Casey to notice their chemistry. Sadly for her, Casey is already engaged to another medical professional. This may sound a little soapy or gooey, but actually, Dawson kicks ass. Literally. Which gets her in to trouble sometimes.

Lt. Casey is arguably the real star of the show. He is played by Jesse Spencer, whom I liked in his House MD days, but who really impressed me on Chicago Fire. He plays the classic good guy, but not in a boring way. His intense storyline involving a dirty cop truly propelled the show to greater heights.

I'm not gonna name every character or storyline, but they're all getting better very fast. (Quick shout out to Eamonn Walker who plays the awesome Chief Boden.) The show may be a bit unrealistic, but that's not what I look for in a good drama. I'm a big fan of Breaking Bad and Dexter, both are very entertaining, and excellently written ánd acted shows, but both are also very unrealistic. Chicago Fire may not yet be on their level of awesomeness, but it is getting there. My point just is, I am really glad I gave this show another chance and I hope that you will too.

Even though I watch every week, I can't help but have to comment on the one main thing that's really gets me about the show - Dawson! I get the these types of prime time shows will have a soap opera aspect to it, but with her it's really irritating. It's all about her. It's not the actress as much as it's the character. If they would tone down that aspect of the show my 6 rating would be an 8, possibly a 9 with a few more tweaks. Still a lesser quality show to PD, especially now that Sophia Bush is gone. It was the same tiresome soap opera with her. However, if you are looking for a solid show(s), the Chicago series is worth checking out, especially the crossovers.

We are SO TIRED of the, squirmy commissioner's rat, story line. PLEASE stop, before you ruin this awesome show! Last season...almost every show used this same, worn out story line! Really...you can do better.

If you are planning on watching this show and pointing out the inaccuracies, don't watch it. This is a FICTIONAL procedural drama, not a documentary on Fire Fighters and Paramedics. Of course there will be inaccuracies, and things will be rushed to get a story told in 45 minutes. Just like there are inaccuracies in shows such as Grey's Anatomy, Law & Order, CSI...it is all unrealistic...yet that does not stop people from enjoying the show.

On the other side, there are some interesting characters that I would like to see more of their back-stories. This show is not perfect, but it is enjoyable and it has my attention for the hour. As with everything, there is room for improvement, and I can only see it getting better with time, if given the chance.

Wasn't perfect but no pilot is. Really enjoyed the show, we found it exciting, fast paced, without too much exposition or clumsy explaining. Liked what felt like some fairly realistic situations, hope they give the chance.

Loved seeing Eamonn Walker. he was a favorite actor I hope they give him a good chance to shine.

My only concern with an ensemble cast is not getting enough character development and interest to keep the show going at the beginning before it gets to sink in and develop a stable audience.

And really enjoyed seeing something set in somewhere other than New York or Los Angeles!!

My wife and I are hooked on this show. We have watched all of the episodes from the beginning and really look forward to seeing it every Wednesday night. The different story lines and plots are enough to keep you interested without being too dramatic. I have read many reviews that say it isn't realistic. It is Hollywood, folks - it can only be as close to real as TV allows. Get over it! I think that some of the rescue scenes are incredible. Hopefully some of the plots that were developing (like the dirty cop plot) are continued as they were great. Give this show a chance - it is like the 70's show Emergency! for 2012. If you like Law & Order then you will like this show too. It has the Dick Wolf touch that makes it a great show. We love it!

I have been a fan of Chicago Fire since day one. When it first started, I watched it for the fire and rescue related calls, the action. I find now, it is far less about calls or incidents to which a fire department would respond, and far more about personal relationships and political nonsense. I can get that junk on other shows. Last night I watched what I consider the best episode of Chicago Med produced to date, because it focused on the events of a hospital emergency department the entire episode, not personal relationships.

OK. I read some of the lesser reviews but I totally disagree. I love this show and after 1 episode I was hooked! And now, seven episodes in, I'm addicted! I know that there are flaws (most medical, trauma, firefighter, cops shows have them), but I love the characters and the way the cast is really coming together. I cannot wait to see what happens next! The plot could be written in so many different ways and I can see the possibilities for this show to run for a long time.

The character development is really good. I love Severide and Casey and am so hoping that NBC is reading these reviews and they renew the show for another year (unlike Trauma). The ratings may not be what they want at this very moment, but please give us of those that love it a chance to continue to do so! It takes a while for word of mouth to spread about a great show, but I'm doing my part to make sure that others tune in. Please keep in mind folks that this is not a reality show. It is for drama entertainment purposes and its wonderful.