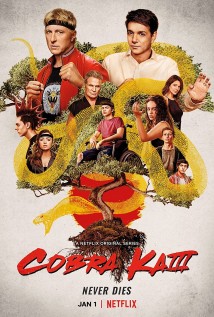 jojobet giriş. I was a big KK fan back in the day and this ticks all the nostalgia boxes while managing to be awesome in it's own right. The acting is great, the story is great and it takes the plot in directions I never expected while making you feel for the characters.

Great work, bring on the next season :D

I was a big KK fan back in the day and this ticks all the nostalgia boxes while managing to be awesome in it's own right. The acting is great, the story is great and it takes the plot in directions I never expected while making you feel for the characters.

Great work, bring on the next season :D

Cobra Kai watchseries. It's corny, predictable, steeped in 1980's nostalgia, full of nods to the original... and those are just some of the reasons to LOVE it! Credit to everyone involved in the making of this series. If you are a fan of the original films then this is going to be exactly what you are looking for. John Avildsen and Pat Morita are definitely here in spirit. Perfect for binge-watching and for transporting yourself back 30 years! :)

Problem is he was typecast and never given a chance to shine. In, Cobra Kai it's his show and he shows a side of Johnny that is a true human experience.

As a typical 80's kid who grew up watching Karate Kid hundreds of times, I can truly say that this show does justice to my childhood memories. It's not perfect and can be a little cheesy at times, but all of that is easily forgiven with the magic instilled in this show.

The creators did a wonderful job in tying in moments from the original and making them fit with the new. The soundtrack is definitely up to par with the movies, but also adds a little bit of a modern twist to it.

Last night I finished episode 7 and all I could think was, "I wish Disney had paid this much respect to the new Star Wars movies as these guys did with Cobra Kai".

It's a great show and I'm trying my best to savor the last few episodes...

This series brought me back to my childhood and how much I loved the movies and characters growing up. It surprised how well the characters are brought up to date and now involve the younger generation. There's still a lot to be taught, and learned.

The answer has finally come to the age old question of "How can you introduce nuance into a cut-and-dry good-vs-evil 80's classic" and it comes in the form of COBRA KAI. While there are many a homage to the film(s) that spawned it, Cobra Kai makes its own name for itself by (gasp) being very well written, and introducing depth to the degree that neither Johnny nor Daniel-San is really "the good guy" or "the bad guy". They both make poor decisions, both are dealing with the traumas of their youth (which, in Danny's case, comes down to Johnny himself in many ways), and they both pass on the positive and negative experiences to their children and/or students in various ways. Danny is often motivated by petty revenge and unable to see any good in Johnny and his Cobras (and not entirely for no reason), and Johnny may be saving himself from....himself and his past and giving his students confidence, but also seems to be making them somewhat into monsters. The show is able to balance all this thematically and do so with poignancy and humor. Unlike, say, an hour-and-a-half long movie, the show is able to burn much more slowly and spend time with its characters and their pasts to provide a tremendous amount of depth. This might even be the thing that makes Youtube Red worth paying for. I'm legitimately hyped for season 2, what the hell. (While I won't spoil the last-minute sting in the final episode, needless to say it's a biggie).

Really watch it, you'll be suprised. Hawk is indeed ourguy