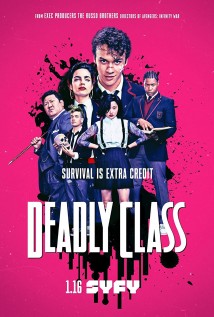 A coming of age story set against the backdrop of late 1980s counterculture, which follows a disillusioned teen recruited into a storied high school for assassins.

I was laying in bed one evening and I saw an advertisement for this series. I thought it looked good and marked the premiere date on my calendar. The violence and dark theme was a pleasant surprise after watching episode one (I'm used to dark shows being watered down). The story was alright, but every episode was like an acid trip. Literally, one episode was just an acid trip. Still, I stuck with the show until the end. Sucks they cancelled it, on a cliff hanger no less. Reminds me of what almost happened to Lucifer.

Another show snuffed out before its time, "Deadly Class" operates on a level mature enough to keep your attention and playful enough to retain its rock-n-roll roots for ten fun episodes.

A show that was cancelled but worth saving! I'm really hoping for Season 2. I didn't get to watch in Syfy and only got the chance to watch it in Netflix. The show is action packed, I'd love to see more of Marcus and friends on a mission, Lana Condor portraying as Saya is a total badass, I just really want to see more!

I was very surprised by just how good this show is. It sticks to the comic. And to the people saying it's unrealistic, of course it is. It's a comic. The premise is ridiculous, but that's one reason why it's so good. Comics show us a different, unrealistic world and that's why we love them. This is exactly what this show does.

Sad this is cancelled. Hope they still find a home on some service.

I love the comic series, big fan, when I heard they were making a show I couldn't wait, I was skeptic over SYFY being the ones behind the show, seeing as they have cancelled a lot of decent shows in recent months. And today it was sadly made official, we won't be getting a second season, such a shame, all fans of the comic know what would have been coming in the next season with the "die for me" arc. But not like it can be change, we have the one season to enjoy and at the very least we have the comics.

If you haven't read the comics I would strongly recommend, especially if you enjoyed the show.

Although the show has been cancelled I would recommend people to check it out, it seemed to be received well with critics, and viewer numbers weren't bad, it was never meant to be a mainstream show, I don't expect it to be a show for everyone.

If you want some fun, bit of change from mainstream tv shows, this is worth checking out.

The overall feel to the show was interesting, I loved the way it was filmed, the Vegas episode was a great take on fear and loathing, and overall was fairly close to the comic, with a couple changes here and there for tv reasons to fill out 10 episodes. So go check it out enjoy, and maybe check out the comic to.

I'll admit I only saw the first episode but wow this really got me going i loved the action the humor even the fun it's got strong females without being extra feminist the shows fantastic so far I only say keep this away from.kids due to.strong adult content language violence.

After watching the pilot, I was genuinely surprised. The show does a great job of capturing the essence of the comic book while moving the plot along at a good pace. So much potential for this show!

I cannot assess whether the late-80's-America's atmosphere had been recreated authentically enough - I'm not an American - but even within the cinematic art's strict context, I think that the whole thing was pretty well done.

I especially enjoyed the soundtrack.

A large portion of the series' cast is rather young, more or less, and although it hardly can be described as a talent pool, these young actors aren't without a promise as well. Most of them obviously are at the very beginning of their respective careers and we should take that into account too when the acting is being evaluated.

Show has an interesting plot at first and great reviews after the first four episode. I like the idea of assassins school, I'm not against some high-school drama, violence and darkness.

Unfortunately somewhere around episode five things start to get stupid. Violence is there for it's own purpose, character diveloplent is non-existent, plot as well. Blood and atrocities are made to shock or intrigue audience but that falls flat without compelling story we could be interested in. Visually the show is interestingly and quality made. It is shame that same isn't true for other aspects of the show.

After watching the entire season I felt as I just spend 10 hours I'm not getting back and definitely wan't be watching second season.

The series aren't very bad, at first sight with interesting settings, but behind the costumes and the main plot of being a school for killers, it's 90% of a boring US teenage drama about a highschool, with all the cliches you can imagine: underdog brave hero who gathers a loyal team, and who's actually much more skilled than everyone expects, love interests fighting for the love of the hero, damsel in distress, nerdy fat guy, light drugs and mad partying, school clubs/gangs, strict director with strict rules nobody follows, dumb and brutal arch-enemy. Behind the facade it's the drama that everyone knows and had seen since 80s at least. Simply boring, and a few action scenes make it barely watchable.

This show could be much more, but it decided not to be. Shame. 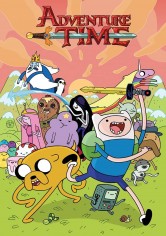 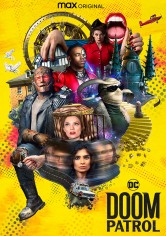 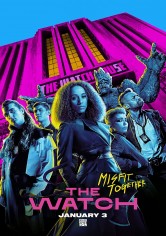