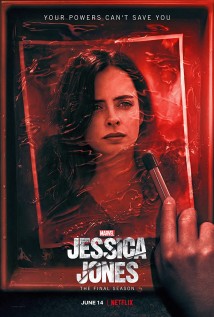 Following the tragic end of her brief superhero career, Jessica Jones tries to rebuild her life as a private investigator, dealing with cases involving people with remarkable abilities in New York City.

Really entertaining show. Only let down by the occasional face palm moment here and there. David Tennant is wonderful and adds a much needed touch of class to proceedings. Carrie Ann Moss is also very good. Other performances are...hit and miss. Overall a solid - if occasionally dopey - show.

Krysten Ritter was absolutely fantastic as Jessica Jones! And as great as she was, Rachael Taylor was equally as bad as Trish Walker. I was rooting for her character to die throughout the entire series! Overall, Jessica Jones is a really good tv show and while it's not quite as good as "The Punisher" or "Daredevil", it's still good and absolutely worth watching! Anyway, this is so much more than just a Superhero show, it's an intense psychological drama that is incredibly well written. Kilgrave (David Tennant) is one of the best bad guys in any Superhero movie or tv show ever. He's not the best but he's up there. It may start a little slow for some but stick with it because I promise it gets better. All 3 seasons are great!

I loved so much about season 1. But even if I try to think forgiving thoughts about a characters stupidity that sort of just goes on and on. Seamingly with no lesson learned. Ever. I can't get over every other stupid, reckless and well STUPID thing Trish does in season 2 & 3. Season one was a 9 for me. Now after 3. My annoyance with the way they wrote Trish (her actions) leave me at a 5. But I LOVED season 1.

This review pains me to write, because I genuinely think that Season 1 was the pinnacle of serialized television. It had amazing plotting, a satisfying ending, a terrifying villain, characters that I loved, nothing superfluous, beautiful cinematography and tone. It delivered on every promise that it made.

I could not wait for Season 2. And those two years were tough. Alas it finally arrived. I knew going in that it had a tough act to follow and so I made a concerted effort to judge it on it's own merits and not to dismiss it just for failing to achieve the impossible by living up to the first.

What went wrong. Plotting: All over the place with little focus. A terrifying villain? Try NO villain. Characters that I love? Yes but the two leads are mostly kept separate from each other for some strange reason. Nothing superfluous? Carrie Ann Moss and her entire sub-plot was boring and irrelevant. Jessica's rival PI was a flat plot device. A satisfying ending? I wouldn't know, I couldn't get past episode 8. It was putting me to sleep. The season did continue to have beautiful cinematography and tone/atmosphere, but that gets no points from me if the writing is dull. Nutmeg can make good egg nog great, but it's not appetizing when eaten on it's own.

I think the biggest problem with Season 2 is that it fails to deliver on Jessica Jones' core promise: it is a sci-fi super-hero show about a tortured loner who does not want to be a superhero but is, none-the-less, forced to fight super-villains because they are threatening her and the people she loves.

In other words, Season 2 was Jurassic Park without Dinosaurs.

Imagine if Jessica Jones hadn't recently undergone the entire adventure with The Defenders...or had...but learned absolutely nothing from it. That's what Season 2 consists of: A poorly written character demonstrating no growth as a human being. And that's the first episode.

The new season is simply bad. The first episode does nothing to draw you in, and the rest of them simply drive the viewer farther and farther away. There's no real villain, the protagonist has grown even more self-pitying and annoying, and the supporting characters seem to exist simply to draw attention away from how weak the overall narrative is. They could have done this with a 2 hour film and not extended the series as they did.

I would advise only fans of the lead actress to watch this program as anyone seeking a superhero Marvel film (especially in the wake of Thor:Ragnarok and The Black Panther) will be hugely disappointed. When you finally get to the end of the series, you ask yourself why you even bothered to take the trip.

Not good at all.

Well, that's 13 hours I won't get back. Season 2 was a huge disappointment. The first six episodes were not bad, but, the plot contrivances and acting got progressively worse up to the end. It seems as if there was a writing staff change midway. The three sub plots had so many logic holes that it is impossible to recount. Maybe the lack of star talent like Rosario Dawson, or a character to play off of like Luke Cage would have helped. If a third season is made, I hope they can rekindle the spark of Season 1.

I am truly baffled by the negative reviews. This show is incredible. Every character is truly fascinating and we get glimpses of their back stories to supplement the story, but I guess people are disappointed that not everything was revealed immediately? I am almost positive that the mystery of Jessica Jones' background is intentional and they will reveal more as the show develops. As for people that complain that the show is boring....these must be the people keeping things like the Transformers series in business. If you're looking for constant explosions and action, you'll be disappointed. However, if you are looking for a show with well developed characters, a chilling villain, a compelling and relatable main character, an intriguing storyline, and just utterly spectacular acting, this is the show for you. No, it's not a typical superhero show. It goes above and beyond in so many aspects. This has raised the bar for superhero stories, in my opinion. Krysten Ritter is superb and very believable as Jessica Jones. I love love love this show! Give it a chance, you will not be sorry you did! I can't wait for Season 2.