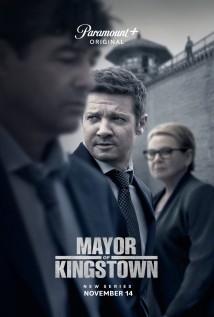 The McLusky family are power brokers tackling themes of systemic racism, corruption and inequality in Kingstown, Michigan where the business of incarceration is the only thriving industry.

This series has already shown its potential as a top notch crime/drama TV series just based on the first episode. Jeremy Renner is a bona fide A-lister film star who signed on to this TV series knowing just how well written it was and which includes a stellar supporting cast of TV and film stars that will allow the series to keep its audience glued to the series episodes each week which I am sure will continue for a few seasons more.

Co-creator and TV and film star in his own right, Hugh Dillon, is quite familiar with the physical location the series was shot which is in Kingston, Ontario, Canada, as he was born in this small town that is best known for housing the Kingston Penitentiary for hard core long term serving criminals.

The series has a real life feel, corruption exists as we all know it exists, but in Kingstown we get to see who is managing the scales of justice. Justice as only street justice exists in Kingstown, and Jeremy Renner who plays Mike McLusky confronts it head on and then dictates how justice will be meted out.

This is going to be the most highly acclaimed crime/drama TV series since the 1999 Sopranos.

Prediction: Multiple Emmy awards over multiple seasons. I can't wait for more episodes to be aired.

As Episode 1 of "Mayor of Kingstown" (2021 release; 10 episodes ranging from 50 to 65 min each) opens, we are introduced to Mike McLusky. He gives a kids $20 to throw a tennis ball into the nearby prison court yard, as the voice-over from Mike informs us that Kingstown is a company town where the business is incarceration (20,000 inmates in 7 facilities). We then go to "Two Days Earlier" and immediately we are submersed into the complex relationships between the city officials (including the cops) and the inmates... At this point we are 10 min into Episode 1 but to tell you more of the plot would spoil your viewing experience, you'll just have to see for yourself how it all plays out.

Couple of comments: first and foremost, this is the latest project from Taylor Sheridan, who created, write and directed this. Some 5-6 years ago, Sheridan came out of nowhere with some of Hollywood's best stuff (he wrote "Sicario" and its sequel, and directed "Hell Or High Water", all to immediate acclaim). Alas, he misfired badly with last year's "Those Who Wish Me Dead", and now comes this. Strictly on the basis of having seen Episode 1, this looks to be an ambitious TV mini-series, with plenty of talent attached to it. But Episode 1 is frankly a bit of a mess, as we are hurled into several complicated parallel story lines and correlating multiple characters. I had a hard time figuring it all out. I can only hope that things will get better in future episodes. All that said, given that Taylor Sheridan is attached to this, I can't help but feel a bit disappointed as of right now. This is far from his best stuff. Jeremy Renner plays Mike McLusky, the main guy and "Mayor of Kingstown" (as he is Mr. "fix-it-all"). Dianne Wiest plays his mother (who teaches US History at the women's prison). As for the many negative reviews here, please don't take them seriously. These people are simply posting their political beliefs and are not reviewing the TV series in any way, shape or form. OK if you don't like this TV series but explain in a serious and well-reasoned way why. They are unwilling or, more likely, unable to do so.

"Mayor of Kingstown" premiered recently on Paramount Plus (the new CBS-affiliated streaming service) and Episode 1 is now available on demand. If you are interested in a gritty crime series, or simply are a fan of Taylor Sheridan or Jeremy Renner, I'd readily suggest you check this out, and draw your own conclusion.

I recall the 1970s police movies like Serpico, French Connection, etc. The theme was that everything was corrupt, bad, and the criminals usually won. The only way to fight the criminals was to be a bad cop, another type of criminal. That seems to be the theme of this show.

I wanted to watch it because of Kyle Chandler. I like Jeremy Renner too. They make a good team, and they have a lot of chemistry together. Unfortunately, that does not last long.

I do not like Dianne Wiest, as I find her to be incredibly whiny in every role. I hated watching Law & Order the three years that Wiest was the District Attorney. She is always guilting people and whining in every role I have seen her. This one is no exception. She plays the mother of Kyle & Jeremy, and she has a big whine about both of them.

The Mayor of Kingston runs the prison system, which is several prisons in the same ten mile area, and thousands of prisoners. A lot of sleazy stuff happens, and Kyle and Jeremy are in the middle of it.

I gave up 45 minutes into the first episode because the story kept getting darker and darker, and took a turn for the worse if you are a fan of Kyle Chandler.

I see this as one of those TV shows were there is no happy ending and no upside, and I am tired of watching depressing TV shows where your favorite actors end up in prison or dead. I am old school, and I want to see the good guys (or the best actors) win.

Renner is perfect in this roll. He is the brother of the Mayor. The mother plays a depressing, liberal history teacher who hates the world. Lots of good stuff, some nudity, some violence. A well balanced cops and robber drama. This one has legs.

There aren't many well made TV shows or even movies around anymore, so this is very refeshing .

And no, it's not a 10/10 - which would make it one of the best ever, what are people trying to do with those Twitter ratings ?

And no, it's not woke, it's not slow and you don't have to wait for the next episodes to see a 'story development' - it's already there .

Do people even watch it before typing whatever the most common review phrases are ?

Anyways, I'm looking forward to the rest of the show, just a shame we still have weekly releases and have to wait .

I'm excited to see where they are taking this. The general plot is a great idea and leaves open a kind of Sopranos-SOA-Justified-Shield-ish type vibe where it can go a lot of places and show a lot of angles. Ignore the negative reviews, anyone who writes off a show based on one episode, or the first 15 minutes of one episodes has no business leaving reviews because their opinion becomes invalid from a lack of depth.

It's like somebody dropped the audience in the middle of the series, no buildup whatsoever. Too much yakity yak yak, that is too technical for the average viewer to understand. Overall, the ambiance is drab. Hopefully the producers picks up on the opinions and perk things up.

Wanna be tough and gritty but at some point it's just repetitive! And how many drone shots I need to tell me about the arena this all plays in. Renner is great but the rest is just playing stereotypes!

Taylor Sheridan is such a talented person. He knows how to create a show or movie and have characters that you root for. Jeremy Renner is great as always, love the gritty action, and the story is gripping. A definite recommendation.

Guys sorry but the first episode is catastrophe! To me it feels like a guidebook of all possible cliches dipped into the really bad acting and poorly written dialogues like each of the character talks like they all have a solid hangover. Please no more! 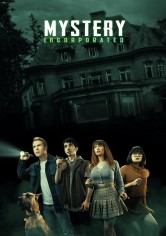