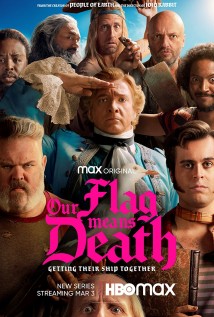 The year is 1717. Wealthy landowner Stede Bonnet has a midlife crisis and decides to blow up his cushy life to become a pirate. It does not go well. Based on a true story.

Verrrry loosely based on a true story... rhys darby is bonnet, a bored gentleman from barbados who decides to spice up his life by becoming a pirate. And thank goodness they sang something besides yo ho ho and a bottle of rum at the start. A humorous look at what it might have been like, if they had a workout gym, and a complete library. On the ship. Very monty python like. At one point, the cabin boy even does a character in high pitched voice. Fun, silly stuff. More info on bonnet in wikipedia dot org. He was born in 1688, and indeed went off to be a pirate. Can't say too much here to avoid spoilers. It's fun and campy. Created by david jenkins, who has written ten episodes. Although currently, there are only three episodes available on hbomax streaming channel. Can't wait for the rest of the episodes! Silly fun, for the most part, mixed in with some very serious parts.

Simply put, this is rubbish! The puerile humor falls flat. It's not clever or funny, just stupid and dumb! It's difficult to understand who is the intended target audience for these trite shows! Perhaps there isn't any, and the content is just made to fill slots on streaming platforms. The show would merit only a 1/10 were it not for the costumes and sets that give it an extra point!

I love taika and I was a fan of people of earth but this show is really dark. And we needed something light after the last few years. Sorry guys so many good people are involved in this but it's just too dark.

Rhys Darby has been always funny, since I first saw him as the talent agent in "Flight of the Concords". And many other funny actors pop up throughout, so you will get some good laughs :-) However, the writing is just not as consistently funny as "What We Do In The Shadows" (for which Taika Waitit is also a creator).

Unfortunately, this is another in a long series of disappointments.

This is supposed to be some kind of comedy or satire, but simply none of it is funny or interesting. The humor is forced and boring, and the series becomes exhausting at the beginning.

The idea is interesting, the cast is not bad, but the script is boring, predictable and all together it looks like another sitcom that is only there to fill the content. The costume design isn't bad, and the directing is solid, but that's all that's good, and that's not enough.

The jokes are forced and it is a pity that everything turned out that way, because the show had the potential to be something more than a boring sitcom.

I even thought this could be great, only to be disappointed in the first ten minutes. I didn't even manage to finish the first episode by the end, because I was starting to get bored at the beginning, and the episode seemed to last an eternity.

Given so much content today, the vast majority of which is unfortunately unwatchable, it just doesn't pay to waste time on something so boring.

Unfortunately, another disappointment and a complete waste of time.

The first 2 episodes were decent, they were somewhat funny and I liked the characters and wackiness but I had a hard time getting used it. The 3rd episode really comes through though and I absolutely loved it. Episodes 4-6 feel different and are absolutely amazing. The show is very wacky and weird, with excellent characters and heartfelt moments mixed with comedy. Taika waititi has made another hit!

The silliness of this show works because of the excellent cast, and it gets better through the later episodes imo. It was probably more fun to produce this than to watch, bit it's exactly the kind of effort that audiences should reward- dumb as it is, it's a great break from the stark reality of 2022 : )

This show is hilarious another hit for Taika Waititi can't wait for more! It's already half way through and I don't want the season to end. HBO has been killing it with comedy's lately.

Watiti made some good original shows but now they think he is the new golden child and doing what hollywood does. Throws money at him and let him do what he wants with little over site. Now that works at times but unchecked you get this. Its not that good and I believe its completely due to the script. The production value is great, the acting is top notch. But again the script not good The humor is mostly low key and broadcasted so far an advance you can figure most of it out 5 min before it happens Now not to just call out Watiti there is a lot of blame for this to go around This unfortunately is another in a long line of original streaming shows that I was looking forward to that I will not be waiting for weekly.

I have no idea if it's bad or good because I only watched the first couple minutes or so. Problem is I started watching Black Sails about a week ago and already almost through with the last season, so to go from watching that to this just felt so disrespectful because black sails is such an amazing mature pirate show and this seems to fall more into the comedic genre and I wasn't in the right mindset from that. I'll definitely check it out later just to see taika waititi in it, but from the glimpse I had it doesn't look like it's gonna be everyone's cup of tea, like a more puerile type of humor. A non bloodthirsty pirate captain going through a midlife crisis.

I can well understand why Taika Waititi said yes to this project. Adding Edward "Blackbeard" Teach to his jewel chest of wicked roles (Alamein in "Boy," Viago, Adolf Hitler) was too good an opportunity. And given that Teach's generation of pirates were surprisingly diverse--a fact that OFMD makes good topical use of--and that virtually no reliable historical documentation of Teach survives other than what came out in his trials, he may very well have been of Jewish Pacific Islander descent. In preparation for watching OFMD I read the entries on Teach and Bonnet from the main source on colonial era pirates and thus for OFMD, the 1724 "General History of the Pyrates," which contains this anecdote about Teach:

"Before he sailed upon his Adventures, he marry'd a young Creature of about sixteen Years of Age, the Governor performing the Ceremony. As it is a Custom to marry here by a Priest, so it is there by a Magistrate; and this, I have been informed, made Teach's fourteenth Wife, whereof, about a dozen might be still living. His Behaviour in this State, was something extraordinary; for, while his Sloop lay in Okerecock Inlet, and he ashore at a Plantation, where his Wife lived, with whom after he had lain all Night, it was his Custom to invite five or six of his brutal Companions to come ashore, and he would force her to prostitute her self to them all, one after another, before his Face."

Has enough time passed to make it okay to glide past this aspect of the real life Teach? Was he worse than Viago, who lived by draining humans of their blood, or sleazy deadbeat dad Alamein, or Hitler? My value system says no, but my stomach makes it hard to enjoy this series as I have other Waititi projects. I just wish he'd turned it down.

This basically adds the character murray from flight of the concords, into an R rated pirates of the carribean themed generic comedy, with oddball side characters. If you are into that sort of thing you will have a great time, I know I did. 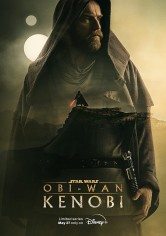 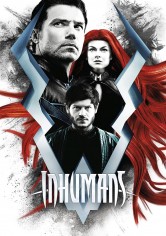 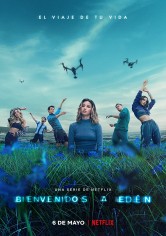 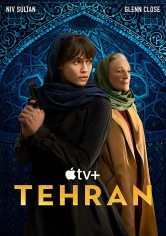