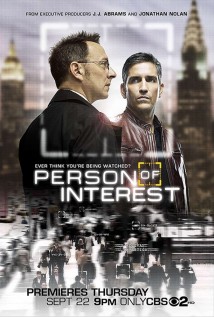 An ex CIA agent and a wealthy programmer save lives via a surveillance AI that sends them the identities of civilians involved in impending crimes. However, the details of the crimes, including the civilians' roles, are left a mystery.

betsat güncel giriş. Finally, something original. The whole premise of the show seems little bit strange at times, but it makes sense. It's something we haven't seen on TV in while. I like the actors that were casted for the show, Jim Caviezel looks good as an ex-CIA hit-man, his martial arts sequences are credible, he looks like he knows what his doing. Michael Emerson is perfect in his role, as an odd billionaire who is a genius. A strange team that solves strange cases, it has a mysterious vibe which is good, it has a JJ Abrams signature all over. Nice bounce back for him after the failure of The Undercovers last year.

Definitely, a show that deserves a chance, it could become a hit, I guess it all depends how the story unfolds beyond the opening episode.

Finally, something original. The whole premise of the show seems little bit strange at times, but it makes sense. It's something we haven't seen on TV in while. I like the actors that were casted for the show, Jim Caviezel looks good as an ex-CIA hit-man, his martial arts sequences are credible, he looks like he knows what his doing. Michael Emerson is perfect in his role, as an odd billionaire who is a genius. A strange team that solves strange cases, it has a mysterious vibe which is good, it has a JJ Abrams signature all over. Nice bounce back for him after the failure of The Undercovers last year.

Definitely, a show that deserves a chance, it could become a hit, I guess it all depends how the story unfolds beyond the opening episode.

Person of Interest watchseries. Warning: This show is extremely addictive, and you should proceed with caution. Side effects of watching this show is : Binge Watching, Cut off from the real world, insomnia from staying up all night watching, and duvet days off work.

This is THE best show on TV. Each series gets better and better.

If you like crime shows, with technology at the highest thrown in, with the A-team background.. then you'll love it. Far better and more addictive than 24.

I've been totally addicted to this show ever since I watched the pilot a few weeks ago. James Caviezel is dark, brooding, yet calm and methodical when he's in action. Michael Emerson from Lost is also effective as the guy who invented the machine that predicts that violent crimes are about to happen.

It's an intriguing show. Closest plot that reminds me about this is Minority Report, but with a made-for-TV treatment that's still pretty damn good. Guest stars are also familiar to those who've watched Law & Order, CSI, etc., and are complementary. The cop trying to chase after him's a bit of a stretch but I guess they need something for continuity.

Worth recommending to those who want to hitch on a new action, mystery show that's very well-written and fantastic-paced.

Go watch it and you won't regret it.

So I don't have too many TV shows that I would say that I'm hooked on. I had LOST while it was on the air, and that was enough for me. Since that show ended, I've had a couple of shows that I've paid attention to, but none have ever really replicated the intensity and addictiveness of LOST. In fact, in those years, there have been shows that I have thought might have the "potential," but they all flopped and didn't get renewed. For this reason, I have a hard time when someone tells me a show is "the new LOST" or something to that effect.

The show that I'm writing about is not it.

Person of Interest is a new CBS crime drama that started airing last week. I didn't know much about it, but I saw that it had received some good reviews. I did some research and found it had some promise.

First off, it was created by two men named Jonathan Nolan and JJ Abrams. If you do not know who these men are, let me explain. JJ Abrams is the man behind LOST. That should be enough, but if you weren't a fan of that show (gasp!), then he also directed the recent Star Trek movie as well as this summer's Super 8. The other man is Jonathon Nolan. His brother is Christopher Nolan, who directed the last two Batman movies and is working on the third. Christopher directed them, but Jonathan Nolan wrote the screenplays. And he wrote the screenplay for Person of Interest.

Secondly, I noticed the cast. As I mentioned, one of the principal characters is played by Michael Emerson. I am of the opinion that Michael Emerson is one of the greatest actors on television. Benjamin Linus was such a complex, mysterious character and Emerson's acting really brought a lot to the show. The main character, however, is played by Jim Caviezel. I've liked this actor ever since he starred in 2002's The Count of Monte Cristo, but many people know him for playing Jesus in The Passion of the Christ. He's a phenomenal actor that is able to bring out the humanity in a character while at the same time portraying the raw nature of man. In other words, he can play a tough guy with a heart.

That being said, let's talk about the plot. The first thing that came to mind was "Minority Report." Both that movie and this television show are about preventing homicides before they happen. However, as the episode progressed, I thought nothing of that movie, as while the premise is not an original idea, here it is presented in a way that does not seek to imitate. Whereas "Minority Report" was about a futuristic "utopian" society in which crime is prevented through precognition, "Person of Interest" is more realistic and less science fiction. It takes place in present day New York City, a city still living in paranoia after the attacks of 9/11. Without spoiling much of the pilot, the premise is based off the massive security and surveillance undertaken by the government, and what would happen if that system were able to identify potential murderers and murder victims before a situation occurred.

It's obviously inspired by several other films and television shows. However, it doesn't seem like it, and from the direction to the acting to the writing, it's clear that this is a show that wants to stand on its own. It's not trying to be the next LOST; it's trying to be a good show. And personally, I think it'll succeed. It has the action, it has the plot twists, it has the suspense, and all the other things we expect ou

With Jonathan Nolan and J.J. Abrams at the helm, I had great expectations from this show and it delivered in the best possible way. 'Person of Interest' is a sophisticated, intriguing, intense thriller with an exciting plot that kept me on the edge of my seat. After '24', this is probably the only show that stands out in this genre.

Jim Caviezel (Reese) plays an ex-CIA hit-man (which itself sounds cool) who is a tough guy but at the same time has strong feelings for his dead girlfriend which he tries to suppress. Michael Emerson, who we know as 'Benjamin Linus' from 'Lost', plays a scientist who hires Reese to do his dirty work. Emerson, who is known to play complex characters, keeps up his end of the bargain by giving a flawless performance. Even though the show has just began, I can see Jim and Emerson sharing great on-screen chemistry in the future (hopefully there is one).

There is a vast difference between writing a screenplay for a movie and a TV episode. But, that did not matter since, Johnathan Nolan, making his debut in the TV industry, had great help in the form of Abrams, who has been doing this day in, day out for so many years. Apart from the talented writing, the show also showcased some riveting action sequences, good editing and awesome visuals. The surveillance cam shots added another dimension to this show.

'Person of Interest' has a lot of potential and I would hate to see it become just another crime show. I hope it continues to impress and gets a renewal soon.

"Person of Interest" is the brainchild of Jonathan Nolan, the brother of director Chirstopher Nolan. Jonathan wrote the screenplays for Christopher's movies "Memento", "Batman Begins", "The Prestinge", "The Dark Knight", as well as the upcoming "The Dark Knight Rises", and "Man of Steel", which Christopher is producing. But, back to "Person of Interest". John Reese (Jim Cavezil. OK, I did NOT spell that right. It's the guy that played Jesus in "Passion of the Christ", is a former government agent who experienced a tragic event in his past, and wants to conceal it from everyone. He is essentially homeless, but possesses some pretty impressive fighting skills. It's these fighting skills that make him noticed by two people: the first is an NYPD agent, Carter (Taraji P. Henson), who doens't really know who Reese is, and Reese doens't want to reveal anything to her. The other person is Finch (Michael Emmerson), a mysterious millionaire who was hired by the government after 9/11 to create a Big Brother like machine that would help save innocent people from being killed. But, eventually, the Machine began to take on a mind of it's own, and Finch took matters into his own hands, helping these people on his own, without the help of the government. It's this that leads him to Reese. He sees in Reese someone like him, a person who can't get over past tragedies, and it's those tragedies that are holding him back from being successful. Finch and Reese become somewhat of business partners, with Finch using Reese to find ways to save innocent people. But, sometimes, these people are not as innocent as they seem.

Johnathan Nolan has created a truly original show here. A gritty world filled with corrupt, and often complex characters. That's partially what makes this show so good. It's ORIGINAL. The world that it portrays may be unfaltering, and corrupt, but something about it feels REAL. You can relate to Reese, however, you don't know enough about Finch's mysterious past to really care about him. However, Michael Emmerson DOES portray this extremely strange and complex character in a way that makes him strangely likable. The action and fight sequences feel like something that belongs in a movie, particularly, one that Johnathan's brother, Christopher, would probably direct, and that Johnathan would probably write. This IS a VERY VERY good show, and it's one that will certainly surprise you.