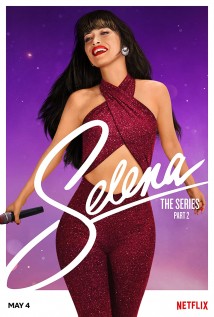 Late Tejano singer Selena as her dreams come true, and her family makes life changing choices on the singer's journey to success.

As a fan of Selena as well as a fan of the original movie, I like the series overall. While I agree with some of the other reviews that the actress portraying Selena is not the greatest, I love the fact that they dove deeper into the background of the family and the band. I find it disrespectful that anyone can say the family is capitalizing off Selena's name when they had the greatest loss but also were the band from the beginning. I personally enjoyed seeing every step that the group and Selena had to take before making it.

The movie was phenomenal but they only showed few events (as they usually have time for in a 2 hour movie). This was a tight knit, loving family that struggled for years until they made it and I think the series, like the movie, captured that. Also, people complaining about how they don't focus on Selena as much, I get it. But as a fan, I personally liked watching how AB wrote and produced the music as well as the relationship between Suzette and Selena. I have to say that the standout performance for me was Ricardo Antonio Chavira who portrayed Selena's father Abraham.

While Selena should always be front and center, I enjoyed watching the family as well. I think it's important to remember that while Selena was an amazing artist and performer that died a horrible tragedy, that's not her whole story and certainly not the families. I am hoping for more depth and complexity to the characters in the second season as we draw closer to the inevitable tragic ending.

While it may be called Selena, the series is really about the Quintanilla family's journey together. Beginning with the Queen of Tejano music's birth and following their various struggles and successes, this show will leave a smile on your face. Along with embracing the family's Mexican American roots, the musical moments will reignite your love for Selena y Los Dinos' songs and have you wishing against reality that a happier ending was on the horizon 25 years after the superstar's tragic end. Part 1 is feel-good family fare just in time for the holiday binge season, but you may shed a nostalgic tear or two.

Show full of empty smiles and unnecessary laughter. It is as if the actress is pretending to be Selena instead of acting like her. That is what happens when you get a 30 year old to play a 15 year old teenager. The youthful energy that Selena had is missing in this show. The only believable acting was when Selena was trying to learn Spanish. Selena seems to be a character made for comical relief rather than a main character, which is disappointing given that this show is named after her.

One of the reasons everybody loved Selena was because she represented many of the first generation Americans of Mexican descent. She had more Native features than Spanish features, which is a reason why her story is incredible, many lower class Mexicans could relate to her. It is disappointing for Netflix to choose an actress that poorly represents who Selena was.m. Netflix decided to whitewash a Mexican Legend.

I have a lot of thoughts which I'm sure I will forget to mention, but most importantly I want to talk about how the family used Selena's name for bait to get the audience to watch this series. Instead of seeing Selena's struggles and dreams, or much of Selena at all, we get her male family member's perspectives about Selena's rise to fame for almost the entire series. Selena is relegated to being a background character, giggling and smiling but not saying very much the entire time. Christian Serratos is beautiful and talented. I'm sure most people would not deny this. However, she's no Selena. She doesn't sound like Selena, doesn't dance like her, and doesn't have the same mannerisms. She doesn't even look like her. The production looks as cheap as the quality of the wigs that they're given. The show is poorly written and reminds me of an after-school sitcom rather than a well-fleshed out biopic, down to the weird white-washed background music. It's boring in every way. The chemistry between the characters is also lacking. Jlo and Edward James Olmos gave an Oscar-worthy performance in comparison to this show. Go watch that instead.

Title says it all. You people are so sensitive over the smallest things. This is pretty good show. 7.5/10 but you all want to rate it 1/10 like it's the worst thing Netflix has ever produced. Get over yourselves. You're not here to protect Selena's legacy. If you were think of the new fans who never knew of Selena and will now possibly be introduced to her music through this story. You can. Because a lot of you are self-entitled and expect everything to be perfect. If you want Jennifer Lopez just go watch the movie again. Give me a break.

Well to start off the series seems very low budget. As a huge Selena fan the acting is very bad. Christian over does it her personality does not match Selena's I get that she doesn't have to look like Selena but she couldn't even dance like her. Not body shaming her at all but Selena wasn't as skinny as christian they didn't portray her beautiful curves. I'm very disappointed since the movie was so great. There are so many actress that would have done way better. Plus the wigs were hella cheap like come on they could have invested in better !! The only reason I'm giving it a two star is because I got to learn a bit more about her family and their struggles. otherwise this show would have got a 1 star and this is only my opinion. It was very hard for me to finish the show but i didn't want to give up on it .

Saccharine and Lifetime-y. Selena is written like a Disney Princess instead of a real person. I'm assuming that is because her family was involved in the production of this series. It really does her memory a disservice not portraying her as the nuanced woman she likely was. This was a real missed opportunity.

My uncle put it best, "it can't decide if it wants to be a comedy or a drama." Some shows are able to pull off both genres, but this show can't. The comedy can be awkwardly delivered and the dramatic moments are comedic, take for example the ending of part 1. Chris gets kicked off the tour bus, Selena looks out to him brokenhearted and the "Ayyyyy como me duele" line from 'Como La Flor' plays in the background with the happy keyboard melody that follows. I had to laugh.

Selena is very, unfairly, one dimensional in this show. That's not the fault of the actress, that's the writing. All she thinks about is her career and music, her love for fashion is shown too. However when it starts to get interesting, for example Selena's time in school or crushing on boys, the show immediately moves on and puts an end to it with a rushed conclusion. It does take plenty of time with Abraham scenes though. It tries to portray him as some sage father figure giving his kids the best "don't give up" type of advice, when in reality he was Mexican American Joe Jackson. Living his dreams through his children, whether they wanted it or not. Selena is like a background character in her own show, she repeats and says whatever the father wants to hear. The other characters seem so unrealistic and cartoony. It's obvious this entire show was rushed.

I will give credit where it's due, I learned more about the inspiration for some of her best songs, about what Suzette and A. B. were up to during their unorthodox childhoods. People are being too harsh to the actress playing Selena, I think she's trying her best, she's working with what she's been given, which is crap. Suzette's actress isn't so bad either, she's very natural. I wish the show was better, I wish it was based on Chris Perez's book instead of Abraham Quintanilla's B. S. I'm not going to compare it to the film and neither should you as these are two completely different things; based on the same story but completely different. That's like comparing Beetlejuice the film to the animated show.

I'll still watch part 2, might as well, but with Abraham Quintanilla behind the scenes, it'll be Abraham's version of Selena's story part 2.

UPDATE (after watching part 2): There was definitely improvements made in Part 2. "Abraham: The Series" took a backseat and it became about Selena, as it should've been in the first place. It still paints Abraham in the most positive light possible, still tries to justify why Abraham and apparently, Suzette, made it impossible for Selena to be with Chris. Finally, It still doesn't do Chris much justice but towards the end the events do add up with what Chris wrote in his book, before getting there though, it's debatable.

The good things, Selena is more realistic - we explore her feelings and emotions more this time around so that was a welcome change. More learning about the backstories to her classic songs, this was an element that was present in the first part that I really enjoyed and it was nice to see this continue with even more detail in the second season. The acting definitely got better from the first season, the actresses playing Suzette and Marcela Quintanilla are still fantastic, as well as A. B's actor, but everyone else got better, not Emmy winning performances but still decent. The way they bring Yolanda into the story definitely gives a better backstory to those who were

A LOT of inaccuracies in the timeline shots of the areas Selena lived in. This series was a disappointment. Seem more focused on the father for a redemption on what a GREEDY miserable pig he is in real life.

Not what I thought at all. The actress doesn't even look like Selena and her lip syncing is so off. If you have insomnia I'd say give this a try, you just might get some sleep.

This series moves so slowly, it lulled me to sleep. I couldn't get past the 2nd episode. Performances are very unemotional and flat....the opposite of the actual Selena. The casting is simply not good. Just watch the 1997 movie and call it a day.