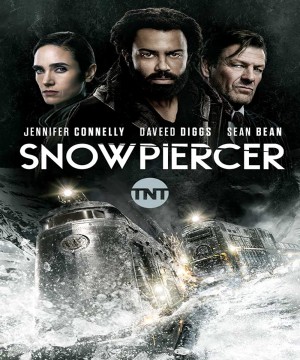 Seven years after the world has become a frozen wasteland, the remnants of humanity inhabit a perpetually moving train that circles the globe, where class warfare, social injustice and the politics of survival play out.

This was a tv show I was eager to watch because of the original movie and of course, because it had a star on it. And then I got so badly disappointed that the main character is such a bad actor !! I could not believe it ! I'm not an expert, not even a native English speaker but if I notice this so clearly I can imagine how Americans should have their heads filled with not so good feelings about such a bad and void acting . Please, replace the actor , do something about him because his performance is so annoying that i cannot see much beyond it. The story itself is ok to watch , nothing great but with some good episodes and some nice CGI at times... but really... main actor needs to be replaced !

For those stating that the premise of a train wrapping around the globe that has to keep running is too unrealistic - that is correct. Though it's a great metaphor for how our class based elitist society is part of a never ending circle that, given the right circumstances , could entirely collapse at any moment.

So no, train like this isn't possible. But that's not the point. Watch the story unfold and if need be pay attention to everything else and let the train part fall to the background. Either way, it's an interesting story and the acting is well done. The scenery is amazingly well thought out , and for a pilot episode they did decent job knocking it out of the park.

I wasn't the biggest fan of the film- but I'm quite interested to see how they do with this. So far, so good.

WARNING - you do need an imagination to watch this show. So if you take everything too literally you won't enjoy it.

The only unbearable part of this show is daveed Diggs- he doesn't sell the part very well at all. The show would be much better without him as a centrepiece: it's a shame they couldn't find Idris or someone a bit more captivating in their acting - Diggs is lacklustre at best and he's outshined by every other character , even the background ones.

Daveed Diggs can't make his character believable for an instant. You can know that another actor would make things much better and easily.He has no presence. All the production, writing and other actors rescue the show.

The show has so much potential, but the leading actor is just not as good as the show deserved. He's a rapper that hadn't play anything like this before. He's got the same face under any circumstances, proving he's still an apprentice and should give some steps backwards and start from the bottom. It's such a pity!

Wilford actor and Melanie actress simply overtake the show in order to save it.