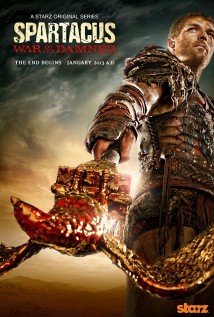 The life of Spartacus, the gladiator who lead a rebellion against the Romans. From his time as an ally of the Romans, to his betrayal and becoming a gladiator, to the rebellion he leads and its ultimate outcome.

It's so good I'm watching it all over again. 10 years later it's still holds up. Amid all the glorious violence I had forgotten just how surprisingly emotional this series was. If you have not seen it, watch it!

For fans of Gladiator, Xena, Hercules, and works by Sam Raimi. You need not have seen the original 1960 film Spartacus to enjoy the series as they are not related.

Warning - every episode contains nudity and explicit sex scenes. You have been warned.

And don't forget to watch the 6 episodes of Spartacus: Gods of the Arena, which aired between seasons one and two, but could be watched after this series. This was basically a holdover for the fans while it was hoped for and assumed by everyone involved that Andy Whitfield's return would be eminent.

Sadly, Andy Whitfield was taken from us a year and a half after the final episode aired. If you like Andy and enjoyed his performance make sure to check out the documentary Be Here Now. RIP Andy Whitfield.

The complete series is an absolute masterpiece. As a former Australia producer I am so proud of the most sincere work not only from the cast but also the crew. Based in New Zealand it brings a complete smorgasbord of the great talents from director, producers, cinematography to a unique editing style and I must impress upon the casting just perfect. To all involved you do yourselves proud and you bring credit to our industry. Job well done!

I don't wanna write a long review, i just wanna put words and thoughts in one sentence : I CAN NEVER WATCH ANY SERIES AFTER WATCHING SPARTACUS

Spartacus is ridiculously underrated and absolutely one of my favorite tv shows ever! It is one of the rare shows where each season is just as incredible as the others, all 4 seasons are fantastic & some of the best tv I've ever seen! I've watched the entire series 3 times already. After the original actor (Andrew Whitfield) who played Spartacus sadly died of non-Hodgkin's lymphoma after Season 1, they had to recast it and the actor who replaced him (Liam McIntyre) as Spartacus was just as terrific! Do yourself a favor and watch this incredible series immediately...you will not be disappointed! It really is the perfect show!

For me the pilot was something of a mix between the graphic violence of 300(it even includes somewhat similar battle sequences), the sex of 300, the idea of Gladiator and a bit of Rome. I almost stopped watching it and I'm glad I didn't do it. People would see the first episode and dismiss it as "gore and sex" time-wasting perversity. And they would be mistaken. The plot, filled with at first glance one-dimensional characters, is so varied, so deep, full of plot twists and unpredictable outcomes that you may find yourself glued to the screen.The sex is still there, the sexy images as well(muscular men and beautiful women), but the characters have gained so much depth and perspective, that you can't say someone is just white or black(with two exceptions). There are so many shades of gray in between, that most of the times even if you want to hate a character for plotting against the protagonist, you find yourself siding with him on another level. The protagonist is not a saint, the "bad guys" show they can love and cherish, and you see the other side of mighty Rome, the one not shown in "Rome". This show, even after the less than spectacular pilot, can be and for the moment is great and it's not the gore or sex that make it so.

In 300, Rome and even Gladiator, to which Spartacus: Blood and Sand is usually compared, the main characters are free men and women, people who act on their generally free will(yes, even in Gladiator). This show is different. Spartacus: Blood and Sand displays the Roman world through the eyes of the downtrodden, the helpless and the people without rights - the enslaved, THE underdogs, who eventually tried to defy the might of Rome, who lost and lost in an epic and tragic way and in their fall still achieved greatness and immortality. Among the nudity, spilling blood and duel sequences, Spartacus: Blood and Sand shows the viewer why freedom is such a cherished thing, what happens when we lose it and why people throughout time have risen to regain it and died pursuing it or defending it.

Some people mock the characters for being "one-dimensional" and demand more complexity. Others have voiced their contempt of the less than accurate representation of "the complex social system of Rome". Spartacus: Blood and Sand does not seek to represent the social system. For the people at the bottom of the ladder it was irrelevant whether Sulla was killing senators or Pompeus was gaining power. As for the one-dimensional characters, let me pound the obvious and say this - when you have to kill a friend at the command of your master, or be killed as well, there's no possibility for inner struggle or soul searching. You can't really disobey your master when humiliation, rape, torture and death lie just a whim away.

It's early to say definitely whether Spartacus: Blood and Sand will be a great TV show. It certainly is for now and gets better and better. Unless the creators manage to screw up gigantically, which they have avoided so far, this child of Starz can become epic.

Yes, the show starts out dull and mindless. Yes, the show offers full frontal nudity. Yes, it's bloody violent (if you measure it in buckets of blood). No, it is NOT a storyless show.

To get it out of the way: If you can't stand a naked breast; skip this one. I know how some people are very sensitive to naked skin, but I guess a chopped off head is OK? (Yes, I'm kicking your way you "Oh, that's Janet Jacksons covered up breast on live TV. I have to call the TV network"-people).

Each episode added a new layer as I see it. The characters grow in dept, and the conspiracies grow ever more entangling. I always wanted to see more after the second episode. The show exploded! For a show like this to even work the producers had to make a choice between kiddy-TV and adult TV. They chose the latter and hit the damn spot. Spartacus Blood and sand is one of the few shows that is just for us "big kids". I don't care if people are naked or headless on TV, as long as it suits the show. In this case it had not worked without it. Praise the gods that someone had the guts to think past the double morals of todays television and just press on! Rome was no flower-covered heaven on earth.

The acting can seem stale at first, but each actor grows in their role as the show progresses. A few of them impressed me, as I had deemed them to be c-graded actors a long time ago (Xena, anyone?). Some of the stars of this show seem to have found a show that suited them as much as they suited the roles they had to fill.

To avoid spoilers I will not say much about the story. What I can say is: The story evolves at the same rate as the actors/characters. Nearing the end you will beg for more! It's hard even to catch your breath after what I have just seen: The last episode offers the greatest form of chatarsis I have ever witnessed/felt in a TV show.

Sorry about the spelling errors and such.

This series rocks! It is full of action packed historical fiction plots. As well as plenty of gratuitous nudity! Hehe

This is not a series for everyone and many people will find a lot in it offensive. They will have good cause. If you are under 16 you should not watch it. Why am i so excited by it then: For the ones that want to see fights, blood, brutality, sex, men looking like gods, blood, erotica, excitement, blood, swearing, allot of skulls being bashed, sweat, savagery, arena fights, honor, friendships intrigues, assassinations, and lets not forget some more blood, this is a show for you.

It is brutal and it is one of the best shows out there. It is not a soup opera and if you are one of those people that got excited by a show like CAPRICA skip this one.

This show makes your hart race. The first episode is the weakest, but by episode 4 which i just saw i am swearing by all the Roman Gods that this is what i was born to watch. It is raw bloody entertainment!

This show is so unique, it is in a category with THE WIRE, thought they have noting in common and their uniqueness lies in completely different places, they are bot light years away of what is being made.

For a low budget with computer graphics, after the first weaker episode, the show becomes so realistic, by episode 4 it has griped me in its razor sharp clutches and the downward spiral of darkness is leaving bloody marks on my soul!