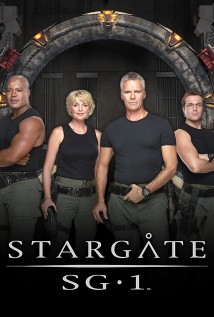 A secret military team, SG 1, is formed to explore other planets through the recently discovered Stargates.

One amazing series it had all the emotions with credible characters I am still watching the repeats to this day . Window of opportunity legend !!!!

Very few TV shows based on films are ever good, this one is. Very few TV shows can maintain their pace and originality over the years, this one has. I've just watched the first 6 episodes of season 4 and each and every one of them has been a cracker.

This show has lots going for it; intelligent and convincing plots, great multi-dimensional characters, superb actors (both major and minor players), expert direction (hats off to Peter DeLuise), continuity of story, consistent use/appearance of sci-fi technology, witty but subtle dialog and almost as an aside, stunning FX.

The only thing left to say is that I feel sorry for people that haven't been watching up till now. Please, it's not too late.

Ten years after Emmerich & Devlin showed the world how it SHOULD be done, the TV spin off of their (still) greatest achievement has finally proven itself to be the best franchise in existence today.

For those unfamiliar with the original film, the Stargate is a device found buried in the Giza plateau of Egypt in 1928. In 1994 (or 1996, if you follow the chronology of the series) the United States Air force has come into possession of the gate and recruits radical Egyptologist Dr. Daniel Jackson (then played by James Spader) to translate the runes found alongside it and activate the gate.

Sure enough, Jackson opens the gate and a reconnaissance team led by the stoic Colonel Jack O'Neil (a dour-faced Kurt Russell) is assigned to survey the world on the other side, later to be known as Abydos. Jackson too, is sent along with the goal of reopening the gate on the other side. Once on the other side though, the team come across a civilisation being ruled over by the mythical god Ra and come to discover the truth behind both the Abydonians and the Ancient Egyptians - that thousands of years ago a dying alien parasite came to Earth and took a host in the form of a primitive human boy (Jaye Davidson). Using his advanced technology, the alien - now in human form - masqueraded as the god Ra, conquering the planet and using the Stargate to transport thousands of humans to Abydos to mine the minerals needed to sustain his technology.

Needless to say, O'Neil and Jackson see to it that the Abydonians are shown the truth about their god and rebel against him. Jackson stays behind on Abydos with his new wife Sha'uri (later changed to Share) and O'Neil's team returns to Earth.

The series picks up one year later, when the now dormant Stargate is reactivated unexpectedly and a hostile alien force seemingly under the leadership of Ra launches an attack on the base, taking a hostage in the process. In response, the base's new CO, General George Hammond (the superb Don S. Davis) calls on the now-retired Jack O'Neill (who, as well an extra 'L' in his name, has also become the much-lighter Richard Dean Anderson) to lead his team back to Abydos and determine the nature of this new threat. Back on Abydos however, Daniel Jackson (now played to perfection by Michael Shanks) shows O'Neill and scientist Captain (later Major) Samantha Carter (Amanda Tapping) that the Stargate can evidently open doorways to more planets than simply Abydos and that whoever attacked Earth did not originate from Abydos.

The situation becomes more critical though, when the same force attacks Abydos and both Share and her brother Ska'ra are taken. Jackson immediately returns to Earth, where the President authorises the creation of nine teams to uncover what lies through the Stargate on each different world - O'Neill's team (including Jackson and Carter) being designated SG-1.

Following the Stargate address seen during the attack on Abydos, SG-1 travel to a planet known as Chulak where they discover the true origin of the enemy force - another alien masquerading as a god, this time as the god Apophis. The situation worsens when both Share and Ska'ra are revealed to have become hosts to the aliens, known as the Goa'uld. Imprisoned on Chulak, SG-1 must rely on Apophis' head guard when he turns traitor and agrees to help the team escape. The alien, Teal'c (the impeccable Christopher Judge), leads the team to the Stargate, all the while fighting a bloody battle in an a

The movie was groundbreaking, and its ideas had great potential for further development. Usually, sequels are made to continue the story on the big screen. Creating this excellent series was a much better decision than producing lousy sequels for the masses.

Fans of the movie get to further explore all the ideas: The Stargate system, used by humans to travel the galaxy for thousands of years; Egyptian, Norse, and alien mythology; true science fiction - with fictional devices and concepts based on current science; and human exploration of our known universe  part of what made Star Trek so popular.

You see the characters develop over time, the quirky unexpected humor, the use of an alien who doesn't fully understand American English (like Data), the struggle of the oppressed, the lengths humans go in order to survive, politics and government bureaucracy, and the underlying tenet that there is more to human life then our brief appearance on planet Earth.

Perhaps to the chagrin of some but the joy of others Stargate refuses to die, with yet another season being signed on for.

What was once signed on for as a four year deal Stargate Sg-1 has went from strength to strength. With memorable episodes sometimes poignant and heart rending like season ones 'Singularity' and season six's 'Meridian' and the hail to the real heroes of the military 'Heroes parts 1 & 2',to the hilarious laugh your ass off episodes like @urgo' and the classic and fans favourite groundhog day episode 'Window of opportunity'. Special fx and great stunt work provide some great action episodes like 'Full Circle', 'Heroes 1&2' and 'The Lost City' Stargate keeps producing. There are numerous fans of every genre it represents whether it be the science, the characters, the adventure, the romance or lack between every type esquire relationship, shippers can imagine.

Stargate SG-1 also has one of the biggest fanfiction bases, with quality writing of every genre produced by numerous writers willing to write about their favourite show and put it out there on the net for people to see.

And now with a widening franchise, from books about the shows best scripts to extended universe and SG Atlantis, it shows it has the staying power that another popular Sci-fi series once did, Star Trek.

If you've never seen it, give it a try, either from the first season or the current eight. Stargate has something which appeals to everyone, whether it be humour, action, or the fact that the characters are so likable and more so drop dead drooling gorgeous. And if that doesn't impress you, take a look at the great amount of stars wanting to be on the show, it's an impressive list.

I think this show is great. A great strength is that it doesn't go into special effects a lot (except for the gate, of course, and the staff weapons/guns). Some compare it to Star Trek (which is unfair, seeing that they are very different) but where a lot of Star Trek plots fail this succeeds.

There are a dozen ways this series can go. It doesn't have a spaceship to fly around in, but rather beams right to an alien planet and gets down to business. Another plus is that it happens NOW, as opposed to a few centuries from now. Area 51 has been mentioned a few times, and the SG site being dubbed Area 52. The actors deserve their share of congrats on the good performances shown, and the writers for coming up with inventive story lines. Some may be recycled or resemble other movies/shows of the past, but they put a special original twist on them that makes it even better. Certainly 'MUST SEE' TV.

A magnificent program which shows just how imaginative and professional TV can be when the director, cast, crew and screenwriters all work to the best of their considerable ability. The simple fact that it doesn't play like the film over and over again (Something which has plagued many film-cum-TV-shows of late) shows how original it really is and though yes, I admit, the first series was very 'Star Trek' in its recycling of the same story types it always remained somehow different.

Congratulations must primarily go to the cast as they are all incredibly believable and easy to relate to. Richard Dean Anderson is excellent as the hard-bitten, cynical soldier, Michael Shanks plays the James Spader role to perfection, Christopher Judge is fantastic as the Moses-like Teal'c (His range of facial expressions is unparalleled) and Amanda Tapping is possibly the best of the bunch simply because she makes her character so believable as the tough female soldier/scientist (Denise Crosby in Star Trek:TNG is a good example of how NOT to do it).

The show looks fantastic, the special effects are great and look exceedingly expensive but no show can survive on sfx alone and fortunately a masterful screenwriting crew keep the stories exciting and thought-provoking (You don't get much of that these days) and the blending of so many different story arcs is a great achievement. All in all a brilliant show and long may it continue.

Ten seasons wasn't enough and it was when they were brave enough to do 22-episode seasons. Evelyn with the last two seasons people leaving and the cast changing Claudia Black and Ben Browder stepped up and they could have went on and kept it interesting wish they would have a show like this again

Its getting old, but remains my most favourite tv show.

I nominate this and BABYLON 5 as the best television sci-fi series made. Both stand out in my mind because unlike early STAR TREK series, there is a consistent evolution of plots and characters. If you look at the original STAR TREK and STAR TREK:TNG, they were fine shows, but there was no overall theme or plot that connected all the episodes. In many ways, you could usually watch the shows totally out of sequence with no difficulty understanding what is occurring. This was less the case with DEEP SPACE 9 (with its giant battles that took up all of the final season) and the other TREK shows, as there was more of a larger story that unified them. This coherence seems to have developed as a concept with BABYLON 5 and saw this to an even greater extent with SG-1. The bottom line is that in many ways this series was like watching a family or a long novel slowly take form. Sure, there were a few "throwaway" episodes that were not connected to the rest, but these were very few and far between and were also usually pretty funny.

And speaking of funny, I loved that SG-1 kept the mood light from time to time and wasn't so dreadfully serious. In this way, I actually enjoyed it more than BABYLON 5. Jack O'Neill was a great character with his sarcasm and love of Homer Simpson--it's really too bad he slowly faded from the series in later seasons.

To truly appreciate SG-1, you should watch it from the beginning and see how intricately the plots work. This coherence gives the show exceptional staying power. And, if you don't like SG-1 after giving it a fair chance, then sci-fi is probably NOT the genre for you.

Hands down the best Sci Fi series ever, and it has aged well.