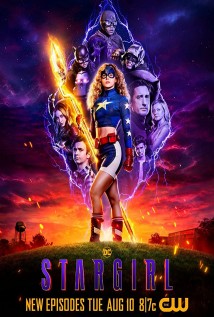 Teenager Courtney Whitmore joins the Justice Society of America. Based on the character from DC Comics.

I had low expectations for this knowing it was teen based and thought it might be to childish but the cast was perfect! The action was decent just the right amount of cheesy humour and a pretty good storyline to boot! The DC Universe has itself another TV gem looking forward to season two!

This show is way way wayyyyyy better than the other superhero shows on the cw! The reason why is because the cw did not create it, dc universe did. The cw is just airing it on their channel and app so it gets more views! I like how this show revolves around a teenager and not adults like all the other superhero shows do! It makes it way more interesting by her having to go to school and dealing with teenage problems! The fight scenes and cinematography are just amazing!!!!! The only superhero show that even comes close to this is arrow and maybe black lightning! Hopefully this show doesn't just go episode to episode just stopping crime like all other superhero shows which make them boring but actually shows the characters lives and problems and them dealing with that type of stuff and not just stopping crime! From what I can tell it is not going to be like the other shows!!

And no, I don't mean uplifting and comical. I mean solid, well-crafted, narrative and visually pleasing. This episode has a cinematography that could very well be featured in a movie. Still too early to tell anything about the plot, but I can already see which characters are going to be relevant based solely on the way they're framed when they show up. That's the director stating "Hey! Pay attention! This guy is about to do something!" Hard to tell if they used a double for the acrobatics, but if they didn't and that's actually the actress, then she an extra mark for that. The only "but" I give it, is that they essentially rebooted the JSA we've seen in Legends, Arrow and Flash, which opens the possibility of introducing a new Arrow, a new Flash, and new *everyone else*s, which is not something you do when you have another version of the same character already developed. A JSA show set in the 1960's would have been ten times better, without the plot devices of modern shows.

Just watched the pilot and have to say that I loved it! I wont go into much detail on the actual plot. Its an origin story and sets up Courtney becoming Stargirl as well as moving into a new town and school.

I will say that we start off with an action packed Justice Society America (JSA) fight with the Injustice Society set 10 years in the past. They show us the 4 members who will eventually get 'new' replacements in future episodes as well as the sidekick of Starman - Stripesy (and Courtney's stepdad).

The dialogue throughout is great. It feels natural and is also very funny at times (Joel McHale was very good!), you wont be able to stop yourself smiling as you watch it.

Also, great special effects, from the opening (and closing) fights, to Courtney's training montage with the Cosmic Staff.

As well as the 4 main family leads, we get introduced to a lot of potential friends and rivals at school. We get the mean popular girl and her '2nd' in command - both were very funny. Then we get the over the top mean jocks (hey, you need the small time school villains to counter the actual supervillains - so I gave it a pass) - and then we get a hilarious bit at the 'singles' table. Beth was great here, as was Yolanda's subtle glare at being called one of the losers.

Also, it has to be said, this feels like it was made pre 2015 (in a very good way!) - which means there is no heavy handed identity politics, social justice or man hating, its just a fun story that's well acted and highly entertaining.

If you thought about giving it a miss because you are over the DC CW, this doesn't feel like one of those shows at all. Its its own thing.

I highly recommend it

I don't think we've ever seen a series like this before. DC's Stargirl is pure, contagious joy, as Courtney gets acquainted with her inanimate-yet-animated staff and all the tricks she can do with it.

Whilst Courtney (Bassinger) is the main focus of the series, she has an excellent co-anchor in Pat (Wilson). There is an arc to their relationship as she learns to accept him as her step-father and comes to grips with his secret life as Stripsey. Bassinger and Wilson have the beginnings of some great chemistry.

From a production standpoint, DC's Stargirl has some truly cinematic imagery which is accented by an impressive level of visual effects. Those concerned about the integration of the S.T.R.I.P.E. robot need not worry, this the production team are using their budget wisely.

Fun, engaging and laced with a gleeful sense of adventure, DC's Stargirl is definitely a show you're going to want to watch.

It visually looks good (relatively) The plot is senseless and mostly childish .. The characters are annoying and inconsistent..

Just by watching the first 5 minutes it's clear that the budget of this series or at least the pilot was big.

The magnitude of the effects are clear to be top tier compared to other DC Comics such as Batwoman or Supergirl, it feels like a version of Snyder's Watchmen's made into a TV show and I really hope it stays like this.

If they give in to CW quality of VFX then it's just going to be one more of the bunch, I really hope it stays like the pilot.

Once again DC Universe and Geoff Johns have brought a quality tv series. It has some of the best special effects in superhero show. The characters are amazing.

The story sounds interesting and I guess you can give a shot at watching the show.... the actor playing stripes and stargirl gave solid performances

Solid writing, healthy character development & fun; what's not to like?

There has been, of late, a great deal of unhealthy, spiteful, politicising injected into teen fantasy drama that specifically attacks masculinity & femininity; Stargirl, celebrates both; it celebrates the human condition. Stargirl is a female led, accessible, fun show. Bravo!

It's a solid 8, but, I've given it a 9 for being a non-spiteful breath of fresh air.

The main character is just another A-Hole with Daddy issues and is not likable. I like the ideas presented here but if your main character isn't likable sorry it doesn't matter. Pat is the coolest dude but Courtney gives him no respect like damn