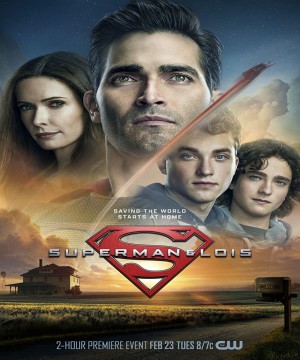 Follow the world's most famous super hero and comic books' most famous journalist as they deal with all the stress, pressures, and complexities that come with being working parents in today's society.

This is far superior to all the other TV DC shows. Wasn't expecting much, but is so much better than The Flash, Arrow and Batgirl etc. Higher production values and isn't wishy washy like the aforementioned shows. Easily the best Superman TV series thus far. Recommended.

Being that this is a Berlanti CW show I was NOT expecting much. The Arrowverse shows are all unwatchable now - with the exception of Stargirl, which Berlanti had nothing to do with. With that being said, I was pleasantly surprised here. Visually its a treat and both the actors playing Lois & Clark do a good job and have nice chemistry. The story and dialogue are pretty good for the most part (its a very basic premise) with only small amounts of the expected CW cringe, which was a welcome change from them.

Some highlights were - the opening montage of Clark's life, the chat between Clark & Martha, the Sam Lane scenes & the fight which went half way around the world - and went from night to day. It was very well executed.

Some things I didn't like - Jordan was extremely annoying and unlikable for majority of the episode. Being an introverted loner doesn't mean you get a free pass to be a d*ck to everyone. Also, they made Kyle way too angry. It should have been a more toned down performance - I know the Hollywood elite hate small town folks and want to make him a bad guy. But at least try for some nuance to hide your disdain.

And lastly, the Luthor virtue signal at the end was laughable. The character is covered head to toe in armor and instead of just saying he's a Luthor, they made him remove his mask first to show black skin (but not reveal his actual face!). Its was the biggest 'Look at me, I added diversity, praise me please!' that I have seen in a while. *Edit - looks like I spoke too soon. JJ Abrams surpassed it in only a few short days.

Curious what the season has planned. Would be great if Cyborg Superman (a robotic looking Tyler), Eradicator and Steel all appeared.

I generally can't stand CW. Boring plot lines, poorly written, very cheesy and poor sense of tone but I was shocked by this show. I watched it on recommendation. I had a lot of trepidation, but within 10mins I was in. Really good casting, excellent tone throughout and a sense of 'realism that CW has really failed to do in the past. It's a very fresh take on saturated genre and overworked superhero and I'm excited to see where this show goes. I suspect it will get chappy after the first season, as usual, but I'm looking forward to this first one.

I am not a fan of CW superhero tv series since Smallville production was taken by this network after WB TV and UPN merged. I liked the first season of Arrow but other stuff - I was never into it. But this... This is something different. Fantastic score gives every scene the PROPER - for me at least - Superman vibe - not just the hopeful vibe but kind of a darker tone too. Something close to a sci-fi atmosphere. It's hard to explain. It just fits perfectly and is enriching the show. The conclusion of the first episode wasn't hard to figure out. I was only waiting for it to happen but it's fine. It shows a lot of today's world problems and it "hits the spot" with showing them. I would say that the world looks very realistic. I only don't like the costume that much. I hope they will improve it. The upper part - near shoulders and neck doesn't look natural for Tyler Hoechlin. I didn't feel any excitment seeing him in that costume. But it's the least of problems or may I say - the only that I had with the first episode. Of course it will stick for the rest of the series but I hope they will really improve it for the second one. The show looks promising and I think it's taking a little bit from Smallville's first few seasons. I am curious what will happen to Kent's sons. And that is the most important thing when watching a show - it leaves you with wanting to know what will happen next. Don't want to give any details about the story but I hope that the hero part will only be Clark's part if you know what I mean. I don't want this to turn into another pseudo-Justice League flick. It's a show about Superman and let it be about THE Superman and his wife Lois Lane - THE one and only - Clark Kent, the one and only Lois Lane. Good job. It's nice that it's on HBO GO.