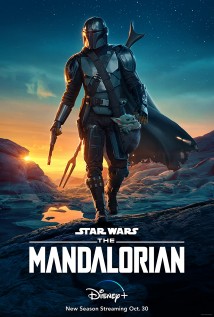 The travels of a lone bounty hunter in the outer reaches of the galaxy, far from the authority of the New Republic.

Jon Favreau should be in charge of all future Star Wars projects. It's exactly how it should be. I will not give 10 stars because nothing is perfect but this is very very close. Hats off!

It's one thing to bring back elements, characters, settings and stories, and to flash them in front of the audience to cash in on the nostalgia and/or recognisable memorabilia but without using it to further the plot and other to do exactly the opposite. It was about time that Star Wars directives understood that it is too unique a product to be lend to corporate filmmakers. Star Wars needs to be understood and its uniqueness has to be acknowledged in order to make the new stories feel like they belong. This may sound too obvious but if you ever wondered why the new SW movies are so controversial this may be the reason.

Like with "Spider-Man: Into the Spider-verse (2018)" and their comicbook-industry experts participation, the creators behind The Mandalorian were experts of the industry, connoisseurs of the Star Wars Universe and even long time fans. So they were able to not only recapture the aesthetic of the grimy, battered Star Wars but also build upon it taking the most "subtle" things into account. Things like the predominancy of puppets and practical effects over CGI, settings you can feel and touch over green screens and the abundancy of not only known elements previously seen in Star Wars, but a whole batch of new creatures, designs and overall plot elements that felt like they belong to this universe and had always been there.

Exceeding expectations are not only the visual aspects but the narrative too. It might be too late for some story elements now, but it is of great importance that from now on you try to watch the unraveling of the story unspoiled. I was lucky to have seen the premiere of the show before the "memefication" of a certain "element" that went viral and became one of the biggest highlights of the show. But for me I saw the reveal of this element unspoiled and I was pleasantly shocked, a memory I'll always carry with me. The ability of these creators to generate such shock value and deep moments it's often baffling to me. This is proof that the creators behind the narrative are fully aware of the complexities of the universe they are tampering with and like an experienced surgeon, they are able to tweak, traverse and call back any Star Wars element as they please and with astonishing results.

It seems to be obvious that series creator Jon Favreau turns to gold everything he touches, from his influence in the MCU with the first Iron Man (2008) movie (still regarded today as a favorite among the infinite Marvel movies) to the remarkable and commercially successful live-action Jungle Book and Lion King Disney movies. He seems to understand how to treat a franchise not by exploiting the nostalgia aspects but rather use them to fuel new stories and "revive" the experience. Not to mention the contributors to this amazing show hype up the expectations and the quality of the show, from beloved names like Taika Watiti to legendary Star Wars showrunner Dave Filoni. The show today is in the most capable hands possible and away from the corporate meddling of Kathleen Kennedy.

Despite everything it does right, I have found some things that distanced me from it. It is merely one small and almost inevitable aspect I don't think a huge lore such as Star Wars can escape from. Something that makes the world-building so real: the subtle callbacks and references found on names and other elements. This is an aspect that non-Star Wars Lore fans (in which I have to identify myself as even though I have read and know some of the deep

This is the Star Wars atmosphere and feeling I've been waiting for. No dumb humor, cool characters, and a story I can take seriously. I'm a big fan of what they've done with this series so far and current Star Wars filmmakers need to take notes. The cinematography is amazing. You can tell they use practicality as much as possible and CGI is used only for the obvious like spaceships and creatures etc. It's a truly remarkable balance of old and new.

What an incredible leap into Live Action Star Wars television. The Mandalorian delivers in both capturing the feel of the classic trilogy as well as it's own unique identity. A sweet spot of western/ sci fi/ action and comedy. Many Star Wars fans have experienced the expertly crafted stories by Filoni in series like "The Clone Wars" and "Rebels". His influence shines bright in The Mandalorian and I believe Star Wars fans will be absolutely thrilled to see his expertise once again bring excitement and wonder back to a Galaxy Far Far Away.

This show is such a refreshing breeze of great quality Star Wars. Hopefully with Episode 9, this horrible era of Star Wars will end, and we will finally get what we all wanted the whole time - great stories set in the Star Wars universe. Stories like this, that make sense. Stories that hook us and make us want more, make us relate to the characters on the screen, just by showing their weaknesses along with their strengths. The Mandalorian has faced more adversity in these two episodes than Rey has in two three hour movies. Definitely my favorite character of the Disney Star Wars era, and he has only said a few lines. Brilliant directing, brilliant script, brilliant execution of everything. I can't wait to see where the story goes.

John Favreau you have my gratitude and respect!

Jon Favreau did a fantastic job here. Beautiful and well crafted series that binds nicely in the star wars story and gives more depth to it. 10/10 Highly recommended.

Finally, this feels like the Star Wars universe. The cinematography, the atmosphere, the story line, wow! My only negative is, the episodes are too short.

This is Star Wars. It feels like Star Wars. It Looks Like Star Wars. Why is this such a tough concept for the geniuses associated with the films to get? No subversion's needed, no forced 8 yr old humor, no political agenda. Just make it look and feel like the original Star Wars trilogy and fans will be happy, its literally that simple.

I like that they gave the Mandalorian some personality, some good vistas and action setpieces, solid comedy, fun little additions to the Star Wars canon (bounty droids are officially awesome) and a general sense of adventure that I dig. It's all very small and big at the same time. All good stuff and I hope they can keep it up.

This is the closest in FEEL we've ever gotten to the originals. The first episode captured the vision i had as child, lying in bed, reading about bounty hunters and the sleazy underground they operated in. All the while making up my story of how I was too sick to go to school, just so I could stay home and get lost in the universe laid before me. I really feel like I was watching an expanded universe book come to life! I can't think of how they could have pulled this off better! Hats off to Jon Favreau for his true understanding of star wars, and Dave Filoni for setting the tone of the series in such a perfect way. My childhood thanks you!

A new chapter for Star-Wars, one like we haven't seen before. First of all, you can feel the star wars vibe from a mile away. The beautiful world-building production- and costumedesign, the thrilling cinematography and the great (sound)editing. There are however some aspects that divide this artwork from the trilogies. the type of storytelling for example. focusing completely on one character, and making this one character so interesting.

With a great cast and great producers, I have high hopes for this little show. Thanks in advantage, Mr. Favreau. 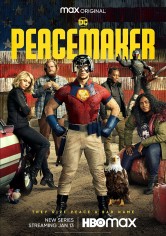 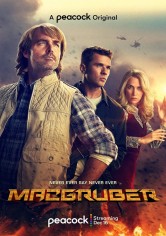 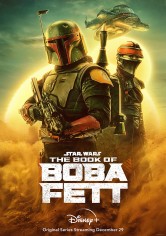 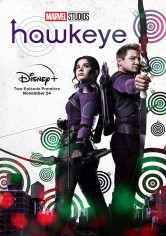