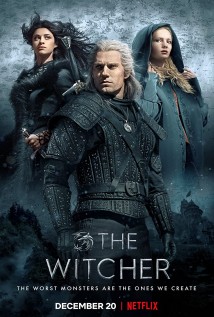 Geralt of Rivia, a solitary monster hunter, struggles to find his place in a world where people often prove more wicked than beasts.

Amazing first season, Henry is Geralt no doubt about it

The Witcher watchseries. Absolutely mediocre. I couldn't believe the high rating for The Witcher on here, so I've come to tip the scale in the proper direction. The writing, timeline(s), dialogue; all of it is a sloppy mess. I feel as though I'm watching a parody.

The Witcher could have been an epic fantasy and I had high hopes as it seemed like Netflix put a lot of work in to make the series good. What I ended up witnessing was some cheesy show that reminded me of a bad fantasy you'd see in the 90s.

The Witcher is based off a series of books, the first being The Last Wish. I've only read the first book but am by no means a purist. Changes can be made to the source material and still work, as seen with LOTR. It's just that everything else has to be good and that's where the Witcher fails.

The overall production of the show is garbage despite the fact that it had a large budget of $70-$80 million. Where did all that money go? Many of the costumes are akin to something you'd find in a bargain Halloween store (looking at you, elves). CGI is also noticeably poor. The world doesn't feel real and it's hard to get immersed when so many things look fake. It's rather impressive that the show looks this awful with such a big budget.

The script could definitely use some work. The dialogue at times is hilariously bad, often making a scene that should be exciting turn into something more like a parody. And even the non-dialogue actions ruin battles, like someone taking their helmet off during war to make a cringe scream while being immune to enemies for 30 seconds, or kissing mid battle to unleash a powerful spell.

The show is structured in an odd way with different timelines. For me it wasn't too hard to follow but I have seen many others wondering what the hell is going on. The problem with the timelines is that they throw the pacing off. I think the show would've been better if it focused mostly on Geralt and his adventures as those were by far the best parts. For example, Geralt has a battle but then they show Yennefer's story in a strange attempt to parallel the two, despite the events not even being in the same timeline or connected in any way.

It looks like the show runners are listening to criticism and they said that season 2 will have a tighter story. I hope the show can utilize the budget to improve effects and that the writers can fix some of the bad dialogue. There's potential here, but unfortunately this first season falls short.

Production has an incredibly important place to shoot a series or film. Sometimes even a very minimalist story can reach an incredibly successful point after the right production stages. The Witcher series is far from minimalist. The Witcher is one of the best Middle-earth works in the world. Production quality is essential if you want to handle such a topic successfully.

The world that The Witcher goes through is a world with its own rules, races, characters, creatures, beliefs, even if it does not seem too strange to those familiar with fantastic narratives. In particular, the first two chapters carry the risk of being too confusing while reflecting the details of this world to the audience. After the chapters where it is difficult to fully understand which character serves whom and why, the story becomes more beautiful as the other characters gradually increase in the narrative. There are two main characters in the narrative except Geralt. One of them is Ciri, who was advised to find Geralt when her lands were taken over by the enemies. The other is Yennefer, a kind of witch whose aim is to gain as much power as possible. While the goal of these two characters is evident, the fact that Geralt at the center of the narrative does not have a significant motivation due to the character's characteristics causes the story to be thrown from one place to another. However, the story deepens as the characteristics of this character become evident and the dynamics of the world in which events take place gradually emerge. It is the primary factor that gives the dark tone of The Witcher's world that people use their power and material resources to seize land. The dark narrative that expresses the evil within man is supported by the visual language of the series. The visual language, dominated by darkness and shadows, brings The Witcher closer to a gothic horror narrative from time to time when combined with the characteristics of the characters it contains. This dark atmosphere also gains a realistic tone with the violence of the series. The Witcher, one of Netflix's most courageous works to date, relentlessly conveys the mess of the world it tells. It creates a consistent and dark atmosphere thanks to well-captured battle and combat scenes and technical details such as image management and music usage. 9/10

I think this is my first review. This series is so bad I had to write one. I don't understand the good score. I have tried on 2 separate occasions to watch this show. Haven't even gotten past the 2nd episode because it is SO BORING. I played the games and enjoyed them so I really thought I would like this series. Henry Caville is gorgeous and a perfect cast for this role. That is the only redeeming quality and why I gave a 4 instead of a 1. Perhaps this show takes a long time to become interesting. But first you must entertain and grip people. Game of thrones started off slow too but you knew if you hung around it would get good. This, I cannot. The dialogue is also awful. You don't care for any of the characters. The story just starts.. doesn't lead into things correctly. The forced diversity... I mean do they think we are stupid? I honestly do not know who is doing these reviews.

I have played Witcher 3 and read some of the books, I'd say I love W3, they did an excellent job with the characters, the world and the overall writing, and the books are brilliant as well. Now coming to the show, starting with what I liked - Cavill's Geralt is absolutely spot on, he nails it. The production value is also decent and some of the side characters like Tissaia and Jaskier are done well. Fight scenes are top notch, Cavill brings the physicality to them that was required.

Now to the bad. Everything is rushed, the pacing is terrible and it's full of awkward timeline jumps that are done so badly that it will confuse even the avid fans of the series. Dialogue at some instances are horrific and the majority of the jokes did not land. The storytelling suffers because of the terrible pacing and the timeline jumps. There is no room for character development, if you do not already know these characters, the show doesn't make any efforts to make you relate to them or care for them(except for Geralt). Infact some of the character and their arcs are changed for the worse in the show. For example, in the books and in W3, Yennefer is sometimes arrogant but she's also genuinely intelligent and cares for people she loves. In the show she does nothing smart, we are just forced to believe that she's intelligent and she throws everyone around her in a dustbin. Yennefer's character segments are all either her whining about what she didn't get from life or acting smart(instead of doing anything smart). She's a complete fool in the show. Other characters like Calanthe, Vilgefortz and Eyck of Denesle are also portrayed horribly.

The casting is bad as well. Except for a few actors, none of them seemed like they belong in a Slavic/East European medieval fantasy setting. Beauty is subjective but some people look better than other in general, Triss looks nowhere near as good as she's supposed to, and infact the minor female character(Renfri) that we meet in the first episode looks better than almost the entirety of the rest of the major female cast whom we know are supposed to look beautiful.

And talking about Slavic roots, well, there doesn't seem to be any here. There is no hint of the Slavic folklore and culture present in the show. W3 did the adaptation of the folklore so brilliantly with all the different East European(and Scandinavian) dresses and costumes, the various folk monster/beast designs and lore, the stories and superstitions of the land, the little intricate details within the accents and the language and the different cultures, and the rituals and customs of the local people. These are the things that differentiated the witcher series from other medieval fantasy stories. There's none of that here. It feels like a generic 2019 superficially diversified medieval show with high fantasy elements. This ain't witcher.

To sum this up, it's not a straight up bad show, but a painfully mediocre one. Though if not for Cavill's brilliant portrayal of Geralt and the very obvious high production value of the show, maybe I would give this a 3. What they needed to do was to take it slow and do what they did in the first episode(which was the best of the season imo) i.e. Start with Geralt's adventures and stories and build up the main narrative(a shorter, more focused one than what this show had) towards a longer season of 13 or 24 episodes. That gives us more time with the characters, and gives the writers more room for exposition and world building,