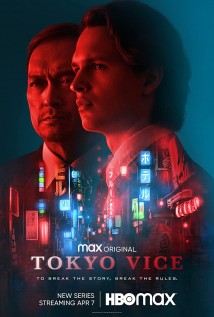 A Western journalist working for a publication in Tokyo takes on one of the city's most powerful crime bosses.

Enjoyed the first three episodes, invested in the main characters and keen to discover what happens next. Daunting at first with the skew toward Japanese with subtitles, though the balance has changed and this has eased significantly. Some great direction producing fine imagery through use of cinematography, wardrobe and linguistics. It is clear the story is a whodunnit exploring the contrast between conformity & self and honour & honesty.

Some fine performances from Ansel Elgort (Jake), Rachel Keller (Samantha) who was excellent as Syd in Legion, Ken Watanabe (Katagiri) and Rinko Kikuchi (Eimi). Each of these characters has been well fleshed out and we understand their respective motivations, their relationship to one another and their place and contribution to the plot.

I'm half Japanese & British American. My dad spoke perfect Japanese, went to Sophia University & was the president of the Foreign Correspondent Club in Japan back in the day. I am ALL IN!

For those who don't understand Japan/Japanese culture, the men speak to him in English because of snobbery and don't consider him an equal, much like Americans and other countries towards immigrants. Most Japanese do study English in school because it's almost universal and no other country speaks Japanese, if you want to do business internationally, you obviously need to be able to communicate. The Japanese culture is steeped in honor, respect, loyalty... and if you can't follow those virtues, you bring dishonor & shame. This show is truly insightful of an outsider's perspective living and working in Tokyo.

I've walked part-way in Jake Adelstein's shoes. I used to work in a Japanese IT company in Tokyo as the only Japanese speaking caucasian employee. I took hour long trips through the crowded train stations, learning to sleep while standing up, jammed between other commuters. Finally returning home after a late night karate lesson to what can only be described as a hole in the wall. Only to get up again with little sleep and do it all over again.

The scenes in Tokyo Vice are as authentic as I've seen - given it's based on a true story, filmed on location, and advised by Jake himself.

From the English teaching, the casual racism, long hours, the stifling bureaucracy and office culture, to the heavy smoking and drinking, to the Russian girls in the hostess "snack" clubs. The neon wonderlands of Kabuki-cho and Shibuya are here on display, but it's portrayed dark, gritty, and noir given the subject matter. People unfamiliar with Japan will be struck by the seemingly absurdist culture which juxtaposes young men trying to act and look tough in a world surrounded by sexual objectification, neon lights, video games, and cuteness - and a near impenetrable ancient culture.

Viewers might also be struck by the Japanese constantly trying to practice their English on the foreigner all the time - despite his high Japanese fluency. When human relationships are fraught with distrust and are only resolved through transactional quid-pro-quo in Japan - something which this series highlights - getting a freebie language practice opportunity is worth it's weight in yen. It's certainly a lot cheaper than the hostess clubs.

Ansel Elgort's attempt at Japanese is a pretty good one, playing the role of the "gaijin" - the well meaning, Japanese speaking, and learned foreigner who is never taken seriously by the culture he's immersed in.

Ken Watanabe is - well - not much else to say. He's brilliant as usual, and his moody detective certainly plays the part.

Can't wait to see the rest of the series, as the first three episodes are extremely watchable.

Great actors, great story lines (based on a true story), and filled with intense dramatic scenes! :-) Ansel, Watanabe, Rachel, and Kasamatsu stand out in the series with great chemistry and great performances!

As Episode 1 of "Tokyo World" (2022 release; 8 episodes of about an hour each) opens, we are following two reporters, one of which is Jake Adelstein. They arrive at a restaurant, only to find out that their hosts, members of the Yakoza, have moved the meeting to a private room. We then go to "1999, Two Years Earlier", as Adelstein is prepping to take a qualifying exam at a major Japanese newspaper, having moved there from Missouri three years earlier. At this point we are 10 min into Episode 1.

Couple of comments: the series is nominally based on the memoir of the real life Jake Adelstein about his years as the only foreign reporter at a major Tokyo-based newspaper. This mini-series immediately appealed to me for several reasons: it provides a "fish out of water" setting (American reporter at Japanese newspaper), along the way offering a glimpse into Japan's (sub)culture and ultra homogeneous society, and brought in a highly stylish setting. It certainly helps that major talent is connected to this series: from executive producer (and director of the opening episode) Michael Mann to Japanese actor (and executive producer) Ken Watanabe to Ansel Elgort ("Baby Driver") in the lead role (Elgort seemingly learned to speak Japanese for this), etc. Last but not least, the story telling is strong, and I am completely invested emotionally into this series.

"Tokyo Vice" premiered on HBO Max a few days ago, and I've seen the initial 3 episodes. New episodes will be released on Thursdays. How this high caliber/high quality mini-series is showing only on HBO Max (meaning not even on HBO) is a mystery to me. If you are in the mood for a dark-ish crime series set in the underworld of Tokyo, I'd readily suggest you check this out, and draw your own conclusion.

Have just watched the first episodes. And they were great. Great acting, fantastic atmosphere, made with style and attitude, and should easily become a must watch, just hoping they will launch a season 2.

It has a feel of Michael Mann's 80s creations, But Tokyo Vice crackles with more intensity, offering up an immersive throwback to a time when the director ruled the roost of cinematic crime dramas. Its great entertainment.

Tokyo Vice is a dark, gritty drama that builds intrigue from the very beginning. The criminals have deep traditions like the Sopranos. The police and the crimes committed are violent and shocking, similar to The Wire, and the cinematography is dark, like Boardwalk Empire. It's everything you want in a classic HBO Mobster/Gangster story with a very talented ensemble.

As always, if you made it this far, thanks for reading, and if you watch this series, let me know what you think.

Just wow ! I am at ep3 and i already feel Black Rain vibes all over the place. Great acting of Rinko Kikuchi and Ken Watanabe, Lets hope we get to see Season 2 as well !

The show is good, while there isn't really much action, the plot keeps you glued in, most of the reviews i have read here has been laughable! The show is actually based about a white dude who worked for a newspaper in Japan, it's not Hollywood trying to just add a white guy, the Jake dude actually exist in real and this is actually a true life story with fictional stuffs tho, and also y'all should stop complaining about the English. 90% of the show dialogue is in Japanese and I seriously don't find any issue with it apart from some Japanese trying to speak English which sometimes sound incoherent to me, apart from that am good! The show is actually dope, and am actually finding that Japanese are actually cool people with a lot of mature lifestyles, anime has had me thinking stupidly of them, the yakuzas are scary AF.

I lived in Japan during this time, as a foreigner, a lot of the mistrust and prejudice is accurate. The corporate life is fast paced and grueling. I saw some reviews complain about all the smoking portrayed, I would say it's actually pretty toned down. The majority of adult males in Japan smoke, and English is taught from a young age, people in Tokyo especially have some basic knowledge of it. Fascinating glimpse into this world, really enjoy it so far.

Follow this tour de force into the cyberpunk future of television. Ken watanabe portrays a detective that rides the line of doing what's right to doing what he needs to to protect his job and family. Meeting up with Ansel elgort wo portrays a reporter fluent in Japanese and searching for the underground truth about crime in the city. They match up with perfect chemistry like a father and son to begin exposing this underground cesspoll that had been protected for generations. The acting writing and cinematography bring the story to the front seat of train and take you on a ride like non other. This will be an incredible show for years to come, Don't miss it.

I watched first 3 episodes and so far, here are my thoughts (having never been to Japan) ...

I really enjoy the mixed languages, where main actors have good control of both.

This has this eastern atmosphere that is hard to explain. Many times, movies try to reinforce it by showing rituals and other things, and this does have a bit of that, but it's not in a very subtle way, so it feels more authentic.

Grit and drama are not there yet, but they are just developing the characters and their dynamics

Music is somewhat interesting. Not sure if it enhances the atmosphere, but so far it does not detracts from it.

Actors are hard to read just yet, as in whether they are cast well, acting well... I need to see more to make that judgement.

What I really like about the show so far that it feels new and fresh, which is hard to say these days...

I am hoping it will deliver the goods, but, so far def worth watching.