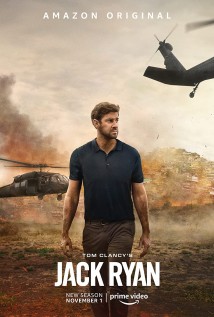 An up and coming CIA analyst, Jack Ryan, is thrust into a dangerous field assignment as he uncovers a pattern in terrorist communication that launches him into the center of a dangerous gambit.

Season 1 was great. It was suspensful, well-acted, briskly paced, and reasonably sophisticated as far as real world politics are concerned. The writers for Season 2 apparently scored a Groupon for lobotomies. I mean everything is just so dumb. Characters do things simply to advance the plot without any explanation or motivation. Noomi Rapace's character just magically materializes whenever the plot needs it. Worst of all, the writers managed to turn Jack Ryan into an uncharismatic idiot. The only reason he manages to solve the conspiracy is because Noomi's character inexplicably does him a favor off screen. Awful, just awful. I give it 4 stars because the footage shot in Colombia looks nice.

I actually gave season 1 9 stars. I love Tom Clancy, and specially Jack Ryan. But season 2 wasn´t Jack Ryan at all. I don´t know where the insiration for the main character came from, but it was definetly not from the books of Clancy. Crazy bad script and also bad acting made this season worse than the final season of GoT. If you love mindnumming action and a story with no sense, by all means take a look. But if you are a fan of Clancys Ryan, I warn you, don´t see this season. Rubbish all the way.

Best thing about season 2 , the intro it's beautiful with music and all but the season is crap...no connect feeling unbelieveble stupid choices of trained military and storie...feels like a bad b grade series with a lot of money into it....too bad, tried for 5 episodes....

Season two is absolutely horrible. Action scenes make no sense whatsoever and the story line is bonkers. Dark, slow and boring. I watched the whole thing hoping the next episode would be better; but they only got worse.

Season 1 plowed no new ground, doing its best to look like another season of Homeland. Season 2, however, was just simply preposterous. Inane storyline that doesn't hold together. Representations of "Diplomacy" that are absurd, even in the Trump era. Characters introduced who are never heard from again. Those characters who do reappear, you wish hadn't (I'm looking at you Imhotep). And John Krasinski? Great at comedy; awkward as the reluctant action hero. I can only hope that season 3 brings back a little of the intelligence that was a hallmark of Tom Clancy's books.

YIKES, where to start?? Season One was watchable enough, fast-paced internationally flavored eye candy, but so forgettable I needed the S1 recap to have any idea of what had occurred or where the first season had left off.

Season 2 is just plain bad. The first season's revisionist portrayal of major characters has been expanded to now include revisionism of entire nation states, lol! I found myself rolling my eyes a half dozen times in the first episode alone, which is never good. Season 2 is semi watchable, but beyond moronic.

Season 2 is poorly written and directed. There are some scenes that are so poorly written that the entire episode suddenly becomes a funny joke. Too bad because I did enjoy season 1.

Yet another Netflix-like example of the modern subscription based streaming content providers producing junk after a couple of good years that now seem long in the past. I think they think we won't cancel our subscriptions.