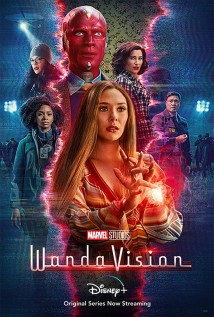 Blends the style of classic sitcoms with the MCU, in which Wanda Maximoff and Vision two super powered beings living their ideal suburban lives begin to suspect that everything is not as it seems.

matbet. Wow wow wow,look you I'll need lots of patients seeing this seriesðŸ‘‰ðŸ‘€ðŸ‘ˆ,if not you will be wasting on it.gradually as you progress through they begin to unravel the mystery behind Wanda nd visionðŸ˜˜ðŸ˜˜ðŸ˜˜.

Wow wow wow,look you I'll need lots of patients seeing this seriesðŸ‘‰ðŸ‘€ðŸ‘ˆ,if not you will be wasting on it.gradually as you progress through they begin to unravel the mystery behind Wanda nd visionðŸ˜˜ðŸ˜˜ðŸ˜˜.

WandaVision watchseries. WandaVision certainly have a very intriguing premise, but pretty much everything else, like the build up to the interesting parts, is a tacky snore. The first three episodes is pretty much just a homage to old sit-coms, but unfortunately they weren't able to make those parts ...you know ...funny. So they merely function as a boring transportation device to the mentioned interesting parts. Couldn't they hire some actual funny sit-com writers for those parts and make them good instead of necessities? Unfortunately when the intriguing more "serious" parts kicks ins, it feels like even those parts of the show gets stuck in some kind of stale combination. When you feel like "Ah, here we go!" it doesn't really go. Is it suppose to be funny still or more serious? Either way, it's not very good at being any of those things.

I had been thinking of watching WandaVision ever since it was announced, but it is only now that I finally got to watch it. And wow this is so good! I had wanted a Marvel show to be as good as a DC show, and this show is the one which finally reached that level (I haven't watched Falcon & the Winter Soldier and Loki yet so I don't know if they are also this good). I liked it so much that I watched the entire season in one sitting. I am writing this review as soon as I have finished the show, so everything is still fresh in my mind.

I have seen many reviews here saying that the first few episodes were bad, or the reviews which came after the first few episodes should be ignored. But personally that was what I liked so much about it. The problem with the show is that it was released weekly instead of just giving the entire season. If the latter was done so, it would have been really good. Seeing how Wanda and Vision are moving into a new decade of sitcom in every episode was actually a pretty good idea, and it would have been perfect if it was revealed slowly that this is a fake reality that Wanda had created.

And that is exactly where my problem comes from this show - S. W. O. R. D. I personally hate seeing the US Army in any superhero or sci-fi show. I don't know why but they have a very boring touch to them, like they are only normal people following orders. And there always has to be this one arrogant leader who will want to take down the protagonist just because he is weaker than them. Godzilla, Pixels, it never fails. And here they straight up gave the exposition. They weren't even needed in the show, and it would have been better if Vision slowly learnt about the reality and then Agnes explained everything. That would have been a much more shocking reveal. But no, they had to copy The Boys.

But other than that I liked everything else about it. Forget Marvel shows, I don't think MCU has ever gone this deep with their storytelling. It's a pity that the first Phase 4 film was Black Widow which was basically the opposite of what this is. The animation, the fight scenes, the acting, the plot twists - everything was phenomenal. I had already received too many spoilers about this show from The Film Theorist and Pitch Meeting, but still I went in and really liked it. The quality of this show is better than most MCU movies (looking at you Black Widow, I won't forget you this easily).

WandaVision is undoubtedly the best show Marvel has made, and most probably also the best show that had come on Disney+ Hotstar at the time. Unlike most good superhero shows like Doom Patrol, The Boys, Titans, Daredevil or Watchmen, this one can actually be enjoyed with the whole family. Although it's a pity that one has to watch all the 23 MCU movies to understand this show (not exactly all but one thing leads to another so yeah), but if you like Marvel and always wanted something about Scarlet Witch, absolutely go for it.

The first few episodes were quirky but uninteresting, the middle set of episodes were an improvement as it was clear something else was going on here and Marvel might take a risk for once, and then they went right back to the formula and ruined all the moving out of the comfort zone and interesting character potential

But Olsen and Bettany are fantastic

WandaVision is so over the top bananas but it works in a weirdly entertaining way! I don't get some of these negative reviews though...did you not watch the trailers? Some of you are acting surprised at what you were watching. I don't get it...what were you expecting that you didn't see? It's a wildly original show that's such a fun ride that you can't turn away and that absolutely pays off in the end. It's a fantastic addition to Phase 4 of the MCU. Elizabeth Olsen is so amazing here that she absolutely deserves an Emmy nomination! I can't wait to see what's next!