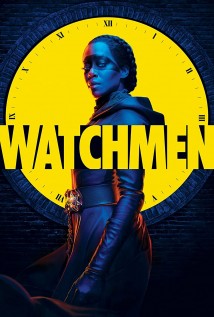 Set in an alternate history where masked vigilantes are treated as outlaws, Watchmen embraces the nostalgia of the original groundbreaking graphic novel of the same name, while attempting to break new ground of its own.

betsat. Don't let the whiny reviews stop you from watching a great series and I read the comic. Damon Lindelof did a great job with this series. I swear people are always looking for something to be offended by. The characters are good and the storyline is good. Watch the show for yourself and stop reading reviews from people who are easily triggered. There was nothing cliche about Watchmen. Trolls really need to be prevented from making reviews because their reviews all sound the same.

Don't let the whiny reviews stop you from watching a great series and I read the comic. Damon Lindelof did a great job with this series. I swear people are always looking for something to be offended by. The characters are good and the storyline is good. Watch the show for yourself and stop reading reviews from people who are easily triggered. There was nothing cliche about Watchmen. Trolls really need to be prevented from making reviews because their reviews all sound the same.

Watchmen watchseries. I really wanted to like it. I'm all about thought provoking shows, and ideas that challenge society. This show feels like it completely missed the entire point of the original graphic novel. The original Watchmen focused on many different political issues that gave it a larger over arching narrative on society. That's absolutely not what this show does. It's way too on the nose and comes off more like pandering to very specific demographic rather then talking about society as a whole and how all of the systems in it are broken and apart of the problem. It felt disjointed. Story elements make no sense. Characters make decisions that make no sense. Things that should easily be explained to progress the story left the myself and people who I watched this with more confused then engaged. It feels like it takes elements of the original story and misrepresents and misuses them.

Made it through the third episode, then just got tired of being told how bad white people are. If there was a point to all of this, I could not care enough to hang around and find out what it was. I can honestly say this is the worst example of reverse racism I've come across since M.A.N.T.I.S. Huge disappointment.

What an absolute disgrace to the Watchman name.

The comics and 2009 movie did such a fantastic job focusing on big picture issues, tackling the tense geopolitical climate during the Nixon administration, deep philosophies such as the meaning of life and the people's right to know vs. international peace.

The HBO television show stripes away all that and instead focuses solely on race. The white supremacists have adopted the Rorschach mask as their symbol (which is incredibly misguided as that's not what he stood for), and the mask wearing police hunt down these white supremacists with a shoot first ask questions later mentality, using torture on suspects without batting an eye.

No doubt supporters of the show will declare that haters are either too dumb to understand the show's little mysteries or are just plain racists if they dislike the show.

If Hollywood wants to create a race-baiting radically liberal television show, by all means go for it, just please don't call it Watchmen. Add this to the unfortunate miss column for Alan Moore along with The League of Extraordinary Gentlemen.

I absolutely love the worldbuilding in this series. But the fundamental ideas were done far better in the sequel comics, this is by far the worst portrayal of Rorschach's legacy compared to Doomsday Clock and Rorschach (comic by King). There's no dissection of his original beliefs, they took a minor fan theory then ran it into the ground so hard it made the 7th Kavalry generic after episode 2.

I think this show would have benefitted from adapting some of the material from the comics, such as the 2nd Rorschach or psychologist's son in Doomsday Clock who was on a similar level of complexity as the original character in terms of backstory and morality.

The majority of the comments here came after one episode. One. Episode. I'm now 4 episodes deep and this story is great. It is timely. It is scary. It's exciting.

Episode 4 starts with a message, "If you don't like the story, write your own."

That is absolutely right.

I have never reviewed a show after four episodes but I traveled to IMDB and saw the rating and felt obligated. This show has acting, cinematography, sountrack, you name it.

It is doing what a good series should and building the story. This show is great. Watch it.