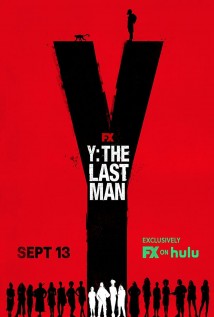 Set in a post apocalyptic world, Y is the last surviving male human on the planet. Based on the comic series "Y: The Last Man."

With perhaps some minor exceptions, I thought the first episode was pretty solid - a very promising introduction with decent exposition and good acting. Was really looking forward to the next episodes.

Unfortunately episodes 2 and 3 were extremely disappointing. It's as if the writers suddenly lost their minds. Characters started acting with a complete lack of any common sense, and the plot devolved into a miasma of scenes that are at best puzzling and at worst nonsensical.

Very disappointing that they could transform such a great comic into such a poor show.

I've watched 1.5 episodes and really can't make myself watch more. I just think this show is so boring. I have not read the comics, but I'm assuming they were good seeing as they adapted a show.

The show starts off slow, which is usually fine if you care about the characters or if there is obvious direction, but this show just introduces unlikable characters for the first 45 minutes , it was soooo boring getting introduced to so many 2 dimensional charecters, I just wanted them to die already.

Perhaps if the main guy was someone I could root for , I would proceed with the show, but instead the last man on earth is a selfish individual that mooches off his parents and sister because he wants to keep working on his dream of becoming a magician at the age of 30 something. The show is not well made, so I doubt they will be able to portray any type of character development.

Is still chasing his monkey around like a 4 year old idiot.

I hope the monkey turns out to be the mastermind of the whole event - then maybe this level of stupidity might be explained.

Although, months lingering in NYC, searching for the woman who rejected him, but making no contact with his family - not even the monkey can explain that level of stupidity.

Comics can be incredible base for a great series but it's not about this show. The idea is great but there is nothing else good about that. Low budget script with poor cliche acting. There was so much more potential in exploring this.

It's unfortunate that this could have been a good theme for a series. I know it is also stupid of me to expect that people would have pragmatic approach to the end of the world like maybe not chasing a monkey around etc. I was so frustrated at the stupidity of the last man, that I wondered whether or not they lack insight into this story or just being deliberately obtuse because they overestimate male appeal or underestimate female intelligence.

I was really excited when this show was announced as I have read the comics years ago. Expected a madmax-type, post apocalyptic series. I am about to quit watching after 3 episodes. This is a soap opera with annoying characters.

Watched the first three episodes. This is bad. Really bad. Lazy writing. Bad acting from good actors, overly-exaggerated acting. Other than the long hair covering important people's face (what's up with the hair!!!), everything else is purposely confusing. Huge plot holes, extremely emotional scenes to cover for the holes. Pseudo-artistic television. There is no way I can watch another episode, even if they pay me for it!

The director or cinematographer again decided that doing the entire show in the dark would somehow make it mysterious, all it did was make it unwatchable. I understand that all the men died, but did that stop the sun from coming up? Do we believe that the White House doesn't have backup power? It's not mysterious it's just hard to see anything that's happening.

The comic was great and had the perfect plot/story for a show or movie series. The comic follows Yorick the last living man on earth and his travels seeing how much society broke down and changed.

This show puts Yorick, what the story is based on, and basically puts him in the backseat to follow politics and people that are nowhere near as interesting or anywhere near as important.

Such a simple concept to follow, yet this feels so lost.

Period. Watching actors desperately trying to get into the pocket.. but spending more time thinking about how they sound. Also, bad dialogue.

I tried to watch the first episode. Starts good for 2 minutes and then it crumbles.

Episode 2: i watched while i was doing other more interesting things. Really.

This show its over for me.i cannot tell you anything specific...Everything is bellow average.dont bother watching it.

Brilliant beginning, and then....so much nauseating crap that it became utterly unwatchable. The writers would do fine in writing daytime soaps. Maybe thirteen year old girls might like this, wow! What a puke fest. How could Diane Lane possibly be a part of this abomination.

I know, I know...everyone always says "the book is better". Well in this case the graphic novel was a whole different story. Spent two hours watching something that in no way resembled the books I read years ago. It's as if the writers/producers tried to tell the same story without the humor, fun or excitement that made the original so good. If you are adapting a graphic novel for a show just film it scene for scene and you've got a hit. Doesn't make any sense!!!

The main guy is such a idiot. 3 episodes in and I can't watch no more. The pilot is the only decent episode.

To make a successful show, the first thing you need to do is grab the audience by their collars and force them to sit still on that couch. First episode: you show the audience that most of the main characters are unlikable. Fail. THE main character, a total idiotic a-hole, who is, did I mention this before, that's right, unlikable. Fail. But Diane Lane gets me to episode 2. And what happens in episode 2? Absolutely nothing! I mean, literally, the story moves ZERO inch. You can skip this episode and go straight to the next episode, and you won't miss anything. Oh, and we get to see the main character as totally useless. Also he's the only one in the entire city who doesn't meet anyone, when everyone else are crowded in big groups everywhere. I mean, I didn't Google this or anything, but I thought the female population is bigger than the male, meaning if all men dies, that would be less than half the population. You walk a mile and you're bound to meet someone, but not this guy, and for days too.

So, yeah, you go straight to filler episode by the second episode, and you fail to grab me. Maybe you still have some fans of the comic books, but keep this up and you'll lose them too. Hire better writers. And directors.